Joe and Susie Agosta in their usual spot in section 116.

There are a lot of interesting people around the Cedar Park Center. "Hockey People" will be a series to highlight some of the great people that we have at the CPC.

If you've been at the Cedar Park Center during the second intermission and happened to see the Kiss Cam, you've probably seen Joe and Susie Agosta. The season ticket holders, seated in section 116, have become famous for their on-screen smooching.

"I go to the bank and people say, 'Oh, I know you! You were on the kiss cam!'" says Susie, a retired preschool special needs teacher. "We're at Sam's, and people stop us," adds Joe, who just retired last week himself. 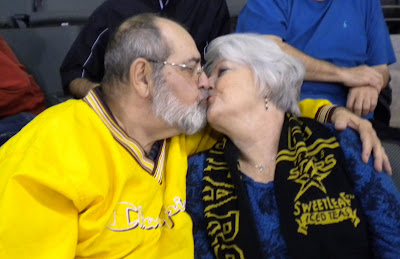 Scott Hill, who selects the shots for the Kiss Cam video board, knows that he has at least one guaranteed couple every time. “When the crowds are a little sparse or you can’t find a couple, they’re an automatic shot. The camera people know where they’re going to be, and they play it up well.”

Joe and Susie first met when they were set up on a blind date. The couple, originally both from Michigan, moved from Miami, Florida, to Austin 20 years ago. Joe, usually decked out in bright Florida State yellow, is an avid Red Wings fan and used to travel to San Antonio to see the Griffins play. When Texas announced their franchise, he was one of the first in line for season tickets.

The Agostas, who just celebrated their 28th wedding anniversary, won the Kiss Cam five times last year and have already won twice this season. For Joe though, it's not about the prize. "I've got a beautiful wife, and I love kissing her. Anytime I get a chance, I'm all for it!"
hockey people human interest interviews