The Past, Present and Future of the Texas Defense 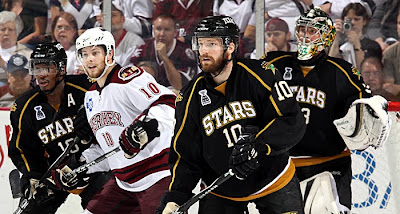 Goalie Matt Climie is flanked by Andrew Hutchinson and Maxime Fortunus in last year's Calder Cup Finals. (Credit: JustSports Photography)
I have been playing with the idea of publishing contributed pieces for a while, and I am hoping this is the first of many. Frequent commenter and Texas Stars season ticket holder James Mitchell takes some time this morning to discuss the Texas Stars defense, including future prospects Brenden Dillon and Jace Coyle.

As Texas makes the push for a spot in the 2011 AHL playoffs, we take a look back to the epic 2009-10 campaign, some struggles in the current campaign, and forward at defensive prospects Brenden Dillon and Jace Coyle. Texas has been on a bumpy ride of late but can hardly be considered to be limping into the playoffs. One of the reasons for this struggle comes in to focus when looking at the stat lines of the Stars' defensive corps compared to last year.

If it weren't for the stats from Dan Spang (10g, 25a, +8), who has struggled in the last few weeks, the comparison to last year would be even more striking. While plus/minus isn't the definitive stat some people would like it to be, a big swing in plus/minus cannot be ignored. Overall, the D corps is scoring less and on the ice for more goals than last year.

With those stats in mind we take a look at defensive prospects Brenden Dillon and Jace Coyle.

Brenden Dillon is in his fourth year of juniors with the Seattle Thunderbirds of the WHL. He's a 20 year old 6'3" 209 pound left shooting powerhouse. Through 72 games for the Thunderbirds, Dillon has put put up impressive numbers for a D man; 8 goals and 51 assists for 59 points. In addition he has 139 penalty minutes. This is good enough for second on the team in both points and penalty minutes.

A quick search of Dillon's name on YouTube shows a long list of fights through his career, and he wins more than he loses. One mildly concerning spot on his stat sheet is a minus-25. There are many reasons that Dillon's plus/minus isn't particularly impressive. A team leader is expected to be on the ice in a lot of different situations, and the Thunderbirds are last in the Western Conference of the WHL and have given up 264 goals while only scoring 195. Anyone with significant ice time on a team with numbers like that is likely to have a poor plus/minus. Dillon looks to be a big physical defenseman with strong playmaking ability and a player that isn't afraid to send a message when its needed.

With the Thunderbirds out of of the playoffs this year, and the injury bug hitting the blue line in Dallas, Dillon is a possible call up for Texas in the near future.

Jace Coyle is also in his forth year of juniors, but with the playoff bound Medicine Hat Tigers also of the WHL. Coyle is a 20 year old 6' 188 pound defenseman with a right handed shot. In 49 games for the Tigers this season, Coyle has potted 6 goals and 22 assists for 28 points. 3 of his 6 goals have come on the power play. More impressively, Coyle is a plus-18 and only has 42 penalty minutes. This is good enough for 2nd in points and plus/minus among Tigers D men. Stats like this show a defenseman that is making smart decisions with the puck in his own end, but with an ability to contribute in the offensive zone as well without making stupid mistakes to do it. In a interview posted to YouTube by the Tigers, Coyle says he considers almost certain NHL Hall of Famer Scott Niedermayer to be his inspiration.

With the Tigers playoff spot locked up, there is no way to know when Coyle's season will end, but once it does he will be eligible to play in Cedar Park.

Brenden Dillon and Jace Coyle are both solid defensive prospects. Both are big in stature, though the Stars would probably like Coyle to add a little more muscle to his frame. Dillon looks to be a gritty player that likes to mix it up as well as contribute on the rush. This is likely to endear him to Texas Stars fans. With a WHL captaincy on his resume, Dillon will also be a calming voice in the locker room. Coyle is more of a stay at home defenseman with solid decision making in his own end but has an offensive upside that the Stars can use.

It safe to say that both will be invited to Stars Rookie Camp next season.
analysis guest blogger