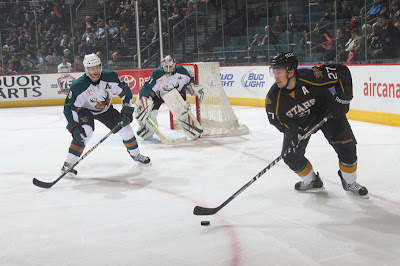 Stars forward Greg Rallo had a career night against his former team, scoring his first AHL hat trick. (Credit: Manitoba Moose)
It was Greg Rallo night in Manitoba as the one-time Moose lit up his former team for three goals. Rallo's hat trick was the first of the season for the Stars and only the fourth in their history, with the others coming from Beaudoin, Gagnon and Jamie Benn. Richard Bachman stopped 31 of 32 shots against in leading the Stars to his franchise record 23rd win on the season.

Texas scored early and often in the 5-1 rout of Manitoba this afternoon. Greg Rallo got the first goal on the night at 6:50, scoring from behind the net off the back of goalie Eddie Lack's leg. Sean Backman got the second of the game off a rebound from Travis Morin's shot just six minutes later. Shots were set at 12-7 after the first 20 minutes.

The second period saw two more from the Stars. Rallo collected his second of the night on the power play, picking the puck up in the slot and slipping it past Lack for the 3-0 lead. Just seconds later, Mathieu Tousignant beat Lack with a wrister from the high slot and chased the goalie from the game.

Lack's replacement, Tyler Weiman, was perfect on the night as Texas slowed down its attack to preserve the win and two points. Manitoba did get one goal in the third period from former San Antonio Rampage Joel Perrault. The Stars countered with an empty net short handed goal on the 6-on-4 to end the game. Of course, it was off the stick of Rallo. The goal was his third of the night and team-leading 24th of the year. The hat trick was his first in the AHL.

The Stars now come home to face the Houston Aeros on Tuesday night. Houston has started to slip away from the pack in the West Division race. Currently the Aeros lead the division in points, but the Admirals have three games in hand and are just one point behind.