About Those Red Flowers: A Canadian Civics Lesson 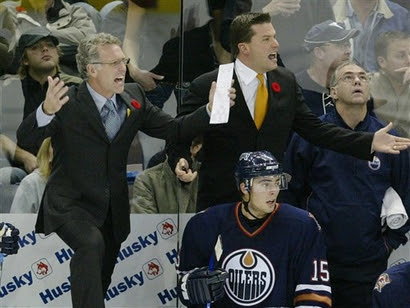 The Oilers coaching staff wears red poppies for Remembrance Day.
You may have noticed in your watching of the NHL and AHL games of the past two weeks that coaches around the leagues are wearing red flowers on their lapels. Red poppies are worn during the two weeks prior to Remembrance Day (November 11th). Remembrance Day is much like Veteran's Day in the United States, a holiday that commemorates the end of World War I. Remembrance Day is celebrated throughout the British Commonwealth.

So why red poppies? One of the best known pieces of literature created out of the war was the poem "In Flanders Fields" by Canadian John McCrae. The battlefield at Flanders during World War I bloomed with red poppies and are now used to signify the event. Additionally, the red of the poppies is an appropriate reminder of the blood shed in the war. Poppies have been worn as a marker of the day since 1921.

"In Flanders fields"
by John McCrae

In Flanders fields the poppies blow
Between the crosses, row on row,
That mark our place; and in the sky
The larks, still bravely singing, fly
Scarce heard amid the guns below.

We are the Dead. Short days ago
We lived, felt dawn, saw sunset glow,
Loved and were loved, and now we lie,
In Flanders fields.

Take up our quarrel with the foe:
To you from failing hands we throw
The torch; be yours to hold it high.
If ye break faith with us who die
We shall not sleep, though poppies grow
In Flanders fields.

Stephen Johns's return to professional hockey was as advertised. Showing no signs of any rust despite 22 months without a competitive game, the defender on conditioning assignment from Dallas was an unbelievable in every aspect of the game, tallying a goal and three assists. He scored and cleared out Marlies in the defensive zone with equal aplomb and helped Texas to a 5-3 comeback win.

"Every time he was on the ice, he made a difference," said coach Neil Graham postgame. Landon Bow added, "From the moment, he stepped on the ice he didn't belong here."

Johns played on the power play, penalty kill and logged more than twenty minutes on the evening paired mostly with captain Dillon Heatherington. The Stars dressed seven defenders just in case but it was clear from the first shift that they didn't need the extra body.

"He just killed it out there," continued Bow. "He couldn't make a bad play. He was throwing guys around. He was shooting…