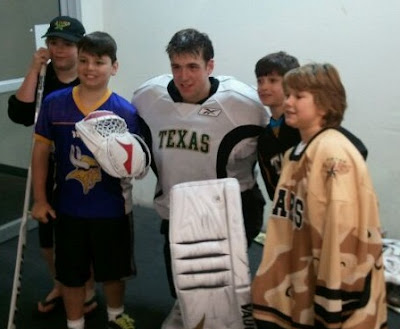 Texas Stars goalie Tyler Beskorowany takes time after practice to talk to youth hockey players at the rink. (Credit: Bill Harris)
Currently in a layoff of four days between away games, the Stars came home and needed to get in some practices before heading out to Manitoba. With Cirque du Soleil's Dralion in town, the Texas Stars don't have an ice surface to practice on in Cedar Park. The only other ice rink in town is the Chaparral Ice.

The Stars practice backed up to a regularly scheduled stick and puck. Stick and puck is a free form practice session for hockey players to come to the rink and work on their skills alone or in small groups outside the context of a game. Local hockey dad Bill Harris brought his son, Eli, who is on Spring Break this week, to the rink during the day. Eli plays goal for his youth team. Bill picks up the story from there:

For some reason, the Texas Stars were practicing at our local ice rink yesterday and today, so Eli got to watch two practices. And the players were unbelievably generous with their time--after they finished practice, every single player signed anything and everything the kids had for them. Eli had his goalie mask signed by at least a dozen different players.

Then there was Tyler Beskorowany.

He was one of the last players to come off the ice, and since Eli is a goalie, he really wanted to talk to him. Which he did, for a few moments, and then Tyler handed Eli his backup stick.

That made Eli's month. Or year. Mine, too.

You can read the full story at Bill's blog, Dubious Quality. Stick tap to Kurt Y. for bringing this story to my attention.
hockey in austin human interest