Posted by Stephen Meserve on April 01, 2011
April 1st at 7:30 PM
Cedar Park Center, Cedar Park TX
There is something to be said for consistency. If you look at the Chicago Wolves, there has been a precipitous climb in their playoff chances since early February. With only one week left in the season, the Wolves are poised to make the playoffs yet again.

However, the Wolves's rise has not been as much about their improved play as it has been about their consistency. This might sound familiar for Texas Stars fans as well. The Wolves fell victim to the great play of their divisional rivals: Peoria, Oklahoma City and San Antonio. Through much of the season over half of the teams in the West division sported win percentages around .600 or better, including the Stars. 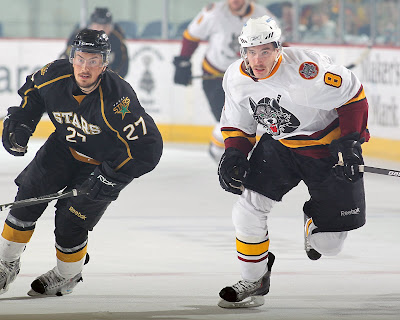 The Wolves and the Stars stayed consistent at their .561 and .603 points percentages, respectively, while the Rivermen, Rampage, and Barons all had significant dropoffs in their play. Wire to wire, the Wolves have been a good team. They have just been judged relative to their peers. Now that their peers have taken a slide, they are showing their true colors and may make the playoffs despite sitting in 7th place in the West for most of the season.

The Stars are 5-0 against the Wolves this season and have outscored the Atlanta Thrashers' farm club 22-11 over those games. The margin is a lot tighter when you eliminate the Stars 8-2 win on November 16th, at a 14-9 advantage for Texas. The Stars come into the game on a four game winning streak and with a 99.2% chance of making the playoffs, according to Sports Club Stats.

Chicago meanwhile visits Texas in between games in Houston yesterday and tomorrow. The Stars will travel to Oklahoma City on Saturday and return home for their last regular season game against the Rockford IceHogs on Sunday.

Trevor Ludwig is out for at least a month after sustaining an upper body injury in last Friday's game against Grand Rapids. Philip Larsen should be available for tonight's game.