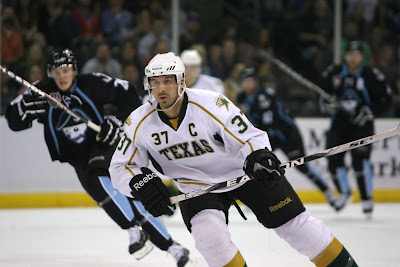 Brad Lukowich scored the game-tying goal with 20.8 seconds left in the third to send the game to OT. (Credit: Ron Byrd/Texas Stars)

The Milwaukee Admirals had the Stars' number for fifty-five minutes. It wasn't that Texas didn't have good chances; they had four power plays in the second period and came this close to scoring multiple times. "[Milwaukee] did get some puck luck," said Coach Gulutzan. "You have to work to create that luck, and I think they did in the first." The Stars turned it on in the last 5 minutes of the third period to take the game to overtime, where their momentum carried them to a 2-1 series lead.

Chris Mueller got the scoring started in the first period off a fluky misplay from Richard Bachman. Working behind the net to cut off a rim-around, the puck bounced out to the left wing circle where Mueller found it and put it into the empty net. The Stars spent a lot of the period hemmed into their own zone. Shots were at 12-6 for Milwaukee in the period and Texas seemed lucky to come out with a 1-0 deficit.

The Stars played a frustrating second period where, as previously mentioned, they went scoreless on four power plays. Texas outshot the Ads 11-1 but couldn't break through Jeremy Smith. Smith seemed to get caught swimming in his crease at times and gave up many rebounds.

The third period brought another Admirals goal with Gabriel Bourque getting his third of the series just 34 seconds in. Then, with just under five minutes left in the game, Gabriel Bourque took a holding call to put Texas on the power play. Rookie defenseman Philip Larsen went to the net and got a Ray Sawada pass deflected past Smith. The crowd was back in it and so were the Stars, who were buzzing in the Stars zone.

With Bachman on the bench, Travis Morin found Brad Lukowich at the point. "Morin just made a great play," said Lukowich. Lukowich shot the puck into the melee in front f the net and it found twine. "We call it a puck with eyes," said Lukowich. With 20.8 seconds left in the period, the game was tied at two.

In the overtime period, it was Travis Morin again, who had three points on the night. Morin deflected a point shot from Maxime Fortunus in the high slot. Smith had already committed low and Morin tipped it high left corner. Just under nine minutes into overtime, the Stars put a bow on a three goal comeback and now focus on tomorrow night's Game 4.