Around the League: Divisional Realignment and Free Agency Losses 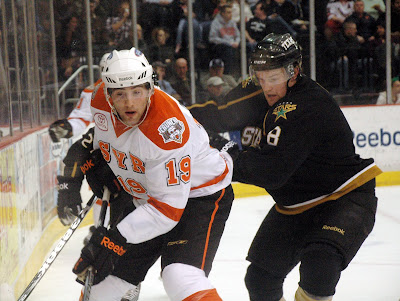 Jordie Benn will be back this year for Texas, after signing with Dallas this weekend, but will he play any games against Syracuse in the new divisional format? (Credit: Syracuse Crunch)

The hockey world doesn't take time out to enjoy Canada Day and the Fourth of July with July 1 being the start of free agency. Let's take some time today to catch up on what you might have missed over the weekend.

By far the biggest story of the weekend was announced yesterday, the realignment of the AHL into six 5-team divisions. With thirty teams, four divisions were no longer enough to properly setup the playoff race. Texas will now play in the West Division with Oklahoma City, Houston, San Antonio and Abbotsford. Playoff seeding will be performed just like the NHL, with the top three seeds going to division winners and the next five being seeded by their total points. For full divisional alignment, check out TheAHL.com's story on the matter.

This is a good change for the AHL at first glance. When the schedule breakdown is released in the next few weeks, we will get more clarity on how much balance the new alignment will bring to the league. If Texas yet again does not play Rochester, a team in its own conference, and other such travesties, the realignment will have failed.