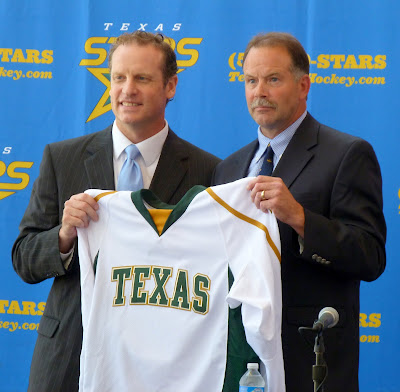 Two years to the date that GM Scott White introduced Coach Glen Gulutzan to the media, White took to the microphone again to welcome Jeff Pyle to the Texas Stars head coaching position. Coach Pyle came across as being genuinely excited to be in Cedar Park and anxious to get started with the team.

White spoke first about the process of hiring Coach Pyle. The team started the process a few days before the official announcement for Gulutzan in Dallas on June 17th. The initial list of 30 potential candidates was whittled down to five viable candidates. How Pyle came to be a part of that list is quite an accident.

With the Stars signing Ryan Garbutt, who played for Pyle in Gwinnett, White and Pyle were in touch on Ryan's skills and capabilities. As a friend, Pyle sent his resume to White for a critique because he was considering applying for other jobs outside Gwinnett. White liked what he saw so much that he added it to the list. According to White, Stars GM Nieuwendyk and Les Jackson "kept coming back to Jeff" in the list.

Unexpectedly, Pyle was asked for an in-person interview in Dallas. He was on vacation in California with his wife and two children. Pyle, who has "racked up the airmiles" in the last few weeks according to White, had to go out and buy a quick, cheap suit and get on a plane to DFW for the July 2nd interview. After an "emotional rollercoaster" of waiting, Nieuwendyk got back to Pyle on Tuesday morning.

"Nieuwendyk called me and said 'I told you I was going to get back to you. And, you know, you're a great guy, your interview went well, and everybody liked you.' And I was waiting for that "but", but it never came." 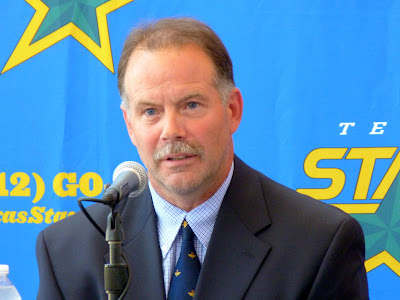 After twelve years in Gwinnett, Pyle focused on the fact that any move he made needed to really be a good situation for him as a coach and for his family. With the Stars and Cedar Park, he feels like he has found that.

"I was overwhelmingly impressed with the organization: how committed they are to each other and how much they have each other's backs," said Pyle. "Most coaches wish they were in that sort of situation."

Another item that is often forgotten is the ECHL's dual GM/coaching role. All ECHL head coaches also do the GM role, which includes recruiting new players, hotels, apartments, travel and all of the administrative tasks for the team. Coach Pyle is excited about focusing on his coaching role 100% in Cedar Park.

"If we could start tomorrow, it wouldn't be soon enough."