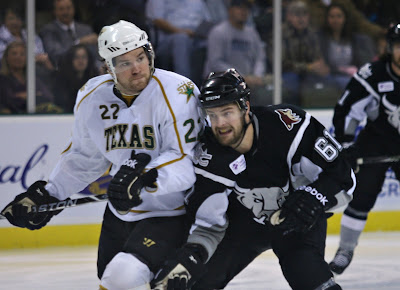 (Credit: Kate Dibildox/Tucson Roadrunners) Tucson, AZ - The Texas Stars opened their '21-'22 road schedule with a 4-0 loss to the Tucson Roadrunners in front of an opening night crowd of 5,097 at the Tucson Convention Center Saturday night. The shutout, the Stars second in the first three games, dropped their record to 1-2-0 (2 pts) on the season, falling to 6th place in the 7 team Central Division, 4 points behind the Iowa Wild, who beat Rockford 5-2 in Des Moines Saturday. The Roadrunners were led by  rookie Ben McCartney's first career hat trick and a 19 save shutout effort from Russian goalie Ivan Prosvetov, his 2nd in a row. With the victory Tucson improved to 2-1-0 (4 pts), good for 5th in the 9 team Pacific Division. As has been the pattern thus far in the young season, the inability to find any measure of success on the power play was a thorn in the side of the Stars, going a dismal 0-for-8 on the night, bringing their total on the season to a tepid 2-for-18 (11.1%)

(Credit: Kate Dibildox/Tucson Roadrunners) Tucson, AZ - The Texas Stars returned to the win column by virtue of a hard fought 6-2 victory over the Tucson Roadrunners (Phoenix Coyotes affiliate) in a game that was much closer than the score would indicate. Tucson outshot the Stars 38-26 on a night that included a 17-6 third period shot advantage for the Roadrunners The Stars were led by 2 goals from Joel L'Esperance and a 36-save effort from Jake Oettinger drew their record even on the season at 2-2-0 while also earning a split on the abbreviated 2-game road trip. Stars captain Curtis McKenzie got the scoring started on the power play 9:31 into the game on a sweet elevated shot on the stick side of Roadrunner goalie Ivan Prosvetov coming off snap feeds from Jordan Kamaguchi and Riley Damiani. McKenzie's goal was his first on the season and a much needed lift for a Texas club that suffered thru an 0-for-7 night on the power play Saturday. The goal from McKenzie was also the first