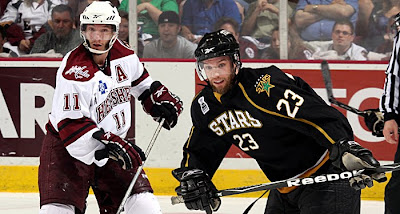 Fans looking for a rematch of the 2009 Calder Cup Finals will be disappointed in the AHL's new scheduling format, which does not pit Texas against any Eastern Conference opponents this year. (Credit: JustSports Photography)

The Texas Stars announced their "schedule matrix" for 2011-12 last night. Due to often playing second-fiddle to NBA in many cities, the AHL is later than most of the hockey leagues to release their schedule. In mid-July each year though, each team releases a list of their expected opponents and how many times they will play each of them. The schedule is better than last year but still unbalanced due to travel concerns.

The Stars will play their new West Division opponents the most, a total of 38 of 76 games or half the schedule. All teams play an equal number of home and road games against each other. Houston and San Antonio will make up the lionshare of that with 12 games each, 6 at home and 6 on the road. The OKC Barons are next in line with 10 total games, and Abbotsford rounds out the schedule with 4. The Heat and Stars will play no more games against each other this season than either of the last two, despite now being in the same division.

The Midwest Division is the next most populated on the Stars' schedule. Texas will play four games against Chicago, Peoria, Milwaukee, Rockford and Charlotte. Charlotte is the only newcomer to the schedule in this division and this year will mark the first games between Texas and the Checkers.

Finally, the schedule is rounded out by the North Division. Texas gets Grand Rapids and Lake Erie four times and Hamilton, Toronto, and Rochester two times. Rochester will also be a newcomer to the Stars' schedule this season, marking the first time Texas has played the second-oldest team in the AHL.

Two games against each Western Conference opponent is the high point of this schedule format. Not playing any games against Rochester in the past two years was a clear fault in the system that has been rectified.

However, zero games against any Eastern Conference opponents is the low point. Texas misses out on seeing half of the league's up and coming talent in this current format. When it comes to selecting All-Stars and end of the year awards, how will East Coast reporters know which Texas players should be on their ballots other than by stats sheets? It's a flawed system, but it's one that will not be easily fixed. Travel costs are the main concern for most of these teams.

Based on history, look for the full schedule to be released toward the end of August.
scheduling