Debuting the Texas Stars "Where Are They Now?" Page 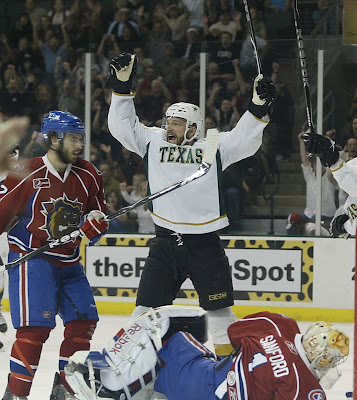 Where is Andrew Hutchinson playing this season? Find out with the new HDH "Where Are They Now?" page (Credit: Cassandra Cruz)
I am still working on compiling together some of the great quotes I got from yesterday's media day with several players, Coach Pyle and GM Scott White.

In the meantime, I wanted to debut yet another new "trivia" page for Texas Stars fans. In the right side banner for the site, you can see several pages listed included attendance records, a listing of all music played at the CPC over the years, records for stars of the game and historical jersey numbers. If you have more music for the music page, by the way, let me know. The most recent addition is Maroon 5's "Moves Like Jagger".

Today, I am adding a new page: "Where Are They Now?" The WATN page will attempt to track the current playing status of all of the former Texas Stars across the globe. It may not be updated as frequently as the others, but will serve as a way to keep track of the players of the past. Please let me know of corrections or additions to this page.

In other news, the Stars announced today that defenseman Adam Pardy is going on the IR with a rib injury and Nicklas Grossman is not expected to play this weekend with a groin injury. This means that Philip Larsen will not only remain in Dallas, but will likely see the ice against Chicago this weekend. For pairings in Texas, that means we have:

Either Coyle or Labrie will step into that 6th man role with the other getting the press box. Andrew Randazzo does have a contract with Allen, but the stocky blueliner (5'9, 220 lbs) is a strong possibility to stick around for now and could even sneak into the lineup.
dallas stars player signings