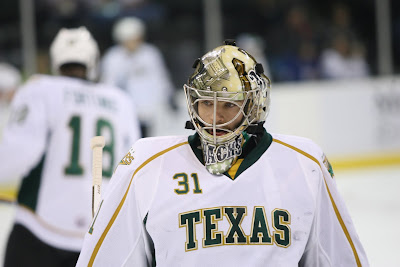 Richard Bachman in warmups for a December 20th, 2010 game against the OKC Barons.(Credit: Texas Stars)
I am sure that I am not alone among Austinites in feeling a little extra bit of pride last night as I watched Richard Bachman shutout the New York Rangers at Madison Square Garden. Despite what was ultimately an ugly grinder of a game, the goose egg remained for the full 60, and "The Biz" collected his first NHL shutout in just his second start. Commentators Ralph and Razor praised the "kid's" performance, calm and controlled with rebounds going exactly where they needed to be. For Texas fans, it was just another hum-drum performance, something that we have been treated to nightly for this season and last.

In my estimation, Bachman is first truly impactful Dallas Stars callup that Texas fans can fully claim as their own. While others have been called, they either didn't or haven't yet made a huge impact (Gagnon, Vincour, Larsen) or couldn't really be called "ours" in the first place (Jamie Benn). This was the piece of the puzzle that Texas fans were missing in the AHL experience, and Richard Bachman has provided it.

Take a look at some other rosters across the league. How many of those pesky Hershey Bears from the 2009-10 playoffs do you see now on the Washington Capitals roster? What about Admirals on the Predators' roster? There are many and that is because of their strong farm systems. Dallas has been, until recently, rather bare in the cupboard with regards to prospects and system depth. As GM Joe restocks, Texas is a major beneficiary as we get to see the future stars of the NHL play a season or two in Cedar Park before moving on.

As those players move on, the NHL club is stocked more and more with former AHLers. Every time one of those forwards tallies a goal, defensemen lays a devastating check or goalies makes a fantastic save, you remember a fuzzy faced young kid who came through the farm system and did the same. This is the full AHL experience that Texas Stars fans have been missing. Richard Bachman is the first of, hopefully, many players who give Austin something special to be proud of in the NHL.
dallas stars NHL call up report