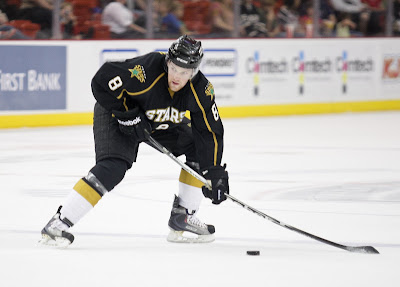 Jordie Benn mans the point. (Credit: Steven Christy)
It's been a long road to the NHL for Jordie Benn, but 2012 is coming up big for the defenseman. Today it was announced that the Stars are recalling Jordie to Dallas coming after the injury to Philip Larsen in last night's win over Boston.

Jordie started his pro career with the now defunct Victoria Salmon Kings of the ECHL and then spent a season with the Allen Americans, who went to the Miron Cup Finals in 2010. That earned Jordie a contract with Texas in 2010-11 and he was an everyday blue liner by the end of the year. This earned him a contract in Dallas and now he has gotten his first recall.

This leaves Texas with just 6 defensemen: Lukowich, Fortunus, Dillon, Spang, Labrie and Coyle. There may be some PTO action coming for Texas now, which doesn't have anymore defensemen under contract in the lower leagues.

The Dallas Stars announced on Sunday that the NHL club has recalled defenseman Jordie Benn from the Texas Stars, Dallas’ primary affiliate in the American Hockey League (AHL).

Benn, 24, co-leads all Texas defensemen in scoring, with seven goals and eight assists for 15 points in 31 games. Four of his seven goals have come on the power play. Jordie Benn is the older brother of current Stars forward Jamie Benn.

The 6-0, 205-pound defenseman from Victoria, BC, is looking to make his NHL debut. Jordie Benn signed a one-year free agent contract with Dallas on July 1, 2011. He played in 60 games for the Texas Stars last season, scoring two goals and 10 assists for 12 points with 39 penalty minutes.