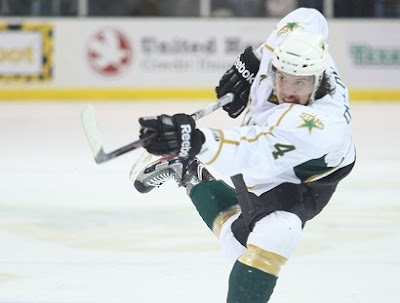 Brenden Dillon was named third star tonight after scoring one of Texas's two goals. (Credit: Portraits by Deena)
This was a real momentum killer for Texas. After winning four straight at home, Texas laid an egg against Houston in the second night of a back-to-back. Houston and Texas were tied in the first but the Aeros potted four straight afterwards en route to a 5-2 win. Tyler Beskorowany took the loss, stopping 32 of 37 shots. The Stars were outshot 37-23, including a 13-4 mark in the first period alone.

As I was unable to watch tonight's game live, here's the release:

The Texas Stars (24-27-2-2, 52 points) were defeated by the Houston Aeros (26-17-3-9, 64 points) 5-2 in front of 6,429 fans at the Cedar Park Center on Saturday night. Aeros center Chad Rau led the way, scoring one goal and setting up two others, helping his team end a four-game winless skid. Veteran forward Jeff Taffe also netted two goals, as Houston improved to 6-2-2-1 against Texas this season. Houston goalie Matt Hackett (17-13-4) stopped 21 of 23 shots as the Aeros moved to 17-10-0-3 on the road. Stars’ defenseman Jordie Benn registered two assists. Defenseman Brenden Dillon and right wing Colton Sceviour each scored for the Stars. Texas goalie Tyler Beskorowany (8-14-0) stopped 32 of 37 shots as the Stars fell to 14-9-2-1 at home. The Stars travel to Abbotsford to take on the Heat on Friday, March 2nd at 9:00 P.M.

The Aeros put up the first goal of the night with a shot from forward Jeff Taffe just 1:18 into the first period. Right wing Jon DiSalvatore and forward Chad Rau each added an assist for the 1-0 lead. The Stars evened the score, 1-1 as defenseman Brenden Dillon slapped the puck past Hackett at 8:39. Defenseman Jordie Benn assisted on Dillon’s third tally of the season.

Houston pushed out to a 2-1 lead early in the second period with a goal from defenseman Kyle Medvec at 2:47. Left wing Kris Foucault and center C.J. Stretch set up Medvec’s first goal of the year. The Aeros extended their lead, 3-1 at 7:37 as forward Jeff Taffe put in his second tally of the night. Forward Chad Rau helped on the play.

The Aeros struck again just 42 seconds into the third period as forward Chad Rau knocked a shot past Beskorowany. Forward Justin Fontaine and center David McIntyre each registered an assist for the 4-1 tally. Houston center David McIntyre slipped the puck past Beskororwany on a penalty shot at 9:22, giving the Aeros a 5-1 lead. Texas scored with 2:09 remaining in the final frame with a goal from right wing Colton Sceviour. Defenseman Jordie Benn and left wing Matt Fraser each supplied an assist for the 5-2 final.