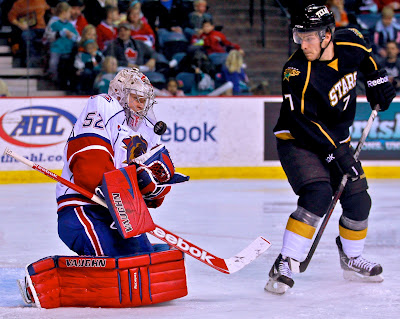 In losing the last seven of eight games, the Stars playoffs hopes are dwindling after losing today to the worst team in the conference in shutout fashion. Despite third star worthy performance from their goaltender, Tyler Beskorowany, the Stars could not overcome Nathan Lawson's 39 saves and Ryan White's two goals.

Here's the release for another game I couldn't watch live:

After a scoreless first period of play, Hamilton opened the scoring at 9:59 of the second period. Center Ryan White carried the puck through center and into the Texas zone down the right-wing wall. White cut to the crease and slipped a backhander passed Stars goalie Tyler Beskorowany for the 1-0 lead. He would strike again late in the period for his fourth goal of the season in as many games. White snapped a shot from the left-wing wall, through traffic and into the Texas net for the 2-0 Hamilton lead. The goal was set up by Captain Alex Henry with 12-seconds remaining in the period.