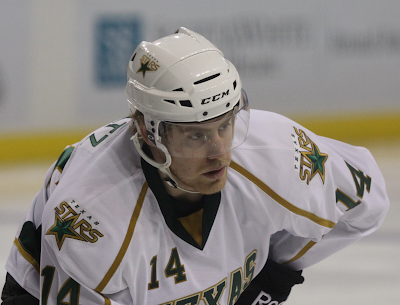 (Credit: Texas Stars)
Following a five game losing skid, there's always bound to be a little bit of shakeup. Texas announced a total of four roster moves this afternoon, two of which we already knew. Texas will be subtracting three and adding just one.

First, the addition is Jake Hauswirth, coming to Texas on recall from Rio Grande Valley. Hauswirth had one assist in eleven games with Texas earlier this year. He had three assists in four games while back with the Bees.

Three subtractions also come today. The first two are PTO releases, Mike Berube and Brendan Connolly. Berube will return to Allen of the CHL while Brendan Connolly will head back to the Greenville Road Warriors. Berube was solid in his time in Texas, just five games, and set himself up to get a look in the future with Texas or another AHL club. Connolly was unable to produce while spending time on the third and fourth line but is a likely callup for an eastern conference AHL club in need of a forward. He had two assists in 12 games with Texas.

Finally, and this is the puzzling one for me, Stephen Schultz has been assigned to Idaho by Texas. The Colorado College rookie has been quite good in his 32 games of action, scoring seven goals and two assists, given the rather limited ice time he usually gets. Schultz also earns shifts on the power play thanks to being a strong right-handed shot. Idaho plays tonight at home against Alaska, but Schultz will not be in the lineup.

The Schultz move is the one that strikes the most at a shakeup. While Schultz hasn't been underperforming particularly much compared to the rest of the team, he is one of the few players in Texas that Scott White has complete autonomy over on movement. For most everyone else, Dallas has to get involved. The only other player on an AHL contract on the team is Mike Hedden.
allen americans idaho steelheads roster moves