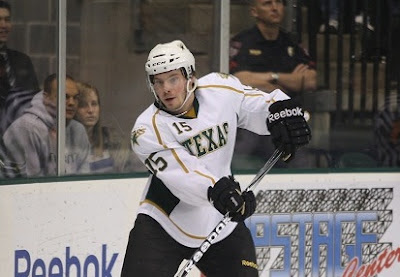 Scott Glennie picked up a goal and an assist on the night. (Credit: Portraits by Deena)
Texas opened a two game set with Houston this evening in Cedar Park with a win, their first in Central Texas over the Aeros this season. The 3-2 regulation win stretched their home winning streak to four games, reaching back to the February 8th game against Milwaukee. When asked about the streak, Coach Pyle added, "Winning everywhere is crucial. We just don't play smart enough on the road to win."

Texas picked up goals from Glennie, Esposito and Wathier while Tyler Beskorowany played a gargatuan game, stopping 39 of 41 shots against. "Getting a couple of wins here in the last few weeks, my confidence level is definitely up there right now," said Beskorowany. Coach Pyle added, "He's been playing better and better in the last few weeks. He made some huge saves for us [tonight] and calmed things down."

Texas opened the scoring in the first period with Scott Glennie's 12th of the year, a bit of a mad scramble in which Glennie potted the goal from behind the icing line, bouncing it in off Kuemper's skate. Sceviour and Lukowich assisted on the play. The goal would be the only regulation tally of the night for either club. Coach Pyle felt that the officiating was a little uneven in the game, but in the end, each club got two power play goals.

Two Houston skaters were sequestered in the box early in the second, allowing Texas's power play to go to work. Travis Morin found Angelo Esposito on the back door on a cross-crease pass for the 2-0 advantage. Houston answered seven minutes later as Fredheim's shot trickled through Beskorowany's pads and crossed the line.

Moving to the third, Texas added the eventual game winner thanks to the Swagger line once again. Wathier got his 12th of the year popped one past Darcy Kuemper, assisted by linemates Sceviour and Glennie. "Wathier and Sceviour are so good for Glennie," said Coach Pyle. "To get him to learn the ropes and the work ethic. They've rubbed off on him, and you can see the chemistry."

The Aeros would add one more tally as Stars-killer Jon DiSalvatore found the net on a 5-on-3 power play. A frenetic last few minutes gave way to a Stars' victory, a regulation victory no less, keeping Western Conference opponent Houston from gaining any ground in the playoff race. These two clubs meet again tomorrow in Cedar Park.

Texas rotated defensive pairs all night, so the lineups above are not particularly accurate. The pairings can best be summarized as all having either Benn, Dillon or Lukowich on them. All the other blue liners rotated out of the second spot at will.

Coach Pyle on Fortunus: "We know it's going to be a while, but I'm not a doctor so I can't say what his injury is."