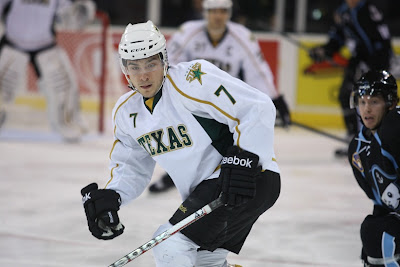 Sceviour potted two but the Stars fell short at home. (Credit: Portraits by Deena)
For the Stars, tonight's game was a microcosm of the entire season. The Stars put 15 on Atte Engren before the Admirals managed a shot. Unfortunately, that shot and the next were both Milwaukee goals. "It seems like every bounce we get, we get two the wrong way," said Colton Sceviour.

While Texas would score three unanswered goals, two from Sceviour, Milwaukee clawed back to win it 4-3 in overtime. "[Up 3-2 late], we have to find a way to win that game," said Coach Pyle. "There has to be more urgency." The OT loss broke Texas's pointless streak, but extended their winless skid to five. "We are struggling to win games," said Sceviour. "But one point is a step in the right direction."

As previously mentioned, Texas bombed the Milkwaukee net with 15 shots early in the first period, including some power play shots as well. Milwaukee got the next four, scoring on two of them. The first goal was generated off a poor clear by Texas. "We put a puck off a guy's pad. That puck should be out of the zone, around the wall," said Pyle. The second goal came just three minutes later as Mark Van Guilder one-timed the puck past Beskorowany. Shots finished at a 15-4 advantage for Texas.

Texas scored the next three with Colton Sceviour leading the way. Sceviour scored off his own rebound on the power play, assisted by Francis Wathier. The PPG broke scoreless streak going since January 21st. Travis Morin tied things up at two with a shot from behind the net, which found twine bouncing off an Admiral. Texas outshot Milwaukee 12-5 in the second.

The Stars went ahead in the third with an embarrassing goal for Atte Engren. Engren flubbed a dump in from Colton Sceviour and allowed the go ahead goal from the red line. Adam Pardy assisted on the play. Texas had a chance to end it with a 63 second 5-on-3, both penalties coming on delay of game calls. They would not convert. "We were trying to make the fancy play, myself included," said Sceviour.

"We have a fear of shooting the puck," said Coach Pyle. "That's where we need to step up."

With five minutes left, Milwaukee would score on the power play to even things at three. Texas would have a spirited effort in OT, but Chris Mueller ended things for the Admirals in the extra period.

Coach Pyle summed it up: "We give up our goals way too easy. Bottom line: those are easy decisions to make and we don't make the right decision and it ends up in the back of the net."

On what Pardy brings to the team, Coach Pyle had this to say: "Energy, big body, experience, and skill. It's fun to watch him play to tell you the truth. He might have overhandled the puck a bit but he hasn't played in a while. Bottom line: it's good to see him come down and bring the energy that he brought."