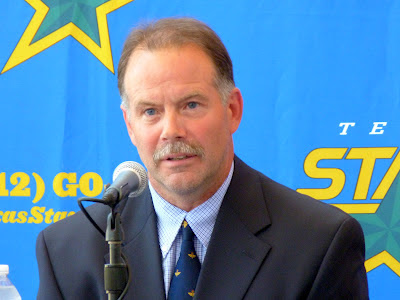 Monday's firing of head coach Jeff Pyle and assistant Jeff Truitt was a swift reaction to disappointing season. I posted my initial thoughts Monday immediately after the firing was announced. Now that I've had some more time to think about it, I have come to the conclusion that this arrangement was doomed to fail from the start of the season, whether it was this year or somewhere down the line. At some point, the system conflict between Coach Gulutzan and Coach Pyle would lead to one of the two leaving the Stars system, more likely Pyle than Gulutzan.

When the hiring of Coach Pyle was announced last year on July 13th, my only question in the public session of the press conference had to do with systems alignment. Scott White had previously intoned the importance of having the entire minor league system aligned and I was wondering how that would work with Pyle's more up-tempo style.

At the time, Scott White said, "We're going to play a similar system to Dallas. We haven't done that in my tenure. I know Coach Gulutzan's system works, and I'm looking forward to seeing it implemented throughout our group."

In answer to my question, Coach Pyle responded:

"I think when the systems are the same, it's easy for the kids to develop. In a lot of situations you'll have the NHL team with one system, the [AHL] team with another and the ECHL with another. So if a kid comes up from the ECHL, it's going to take him time to learn the system. Same things with the [AHL] to the NHL. Now with continuity, you have the guys go up and they already know the system.

This is great quote material but the proof is in the pudding. If you were to compare a typical Glen Gulutzan coached hockey team with a Jeff Pyle coached team, you would not see many similarities. Let's enumerate some of the differences here.

One of the most obvious differences (because it's a matter of counting) is the two-man forecheck that Pyle plays. Gulutzan only plays a one-man forecheck. In this system, Pyle is more likely to generate turnovers but less likely to have adequate defensive coverage if a breakout pass makes it out of the zone.

Another difference is the way that the defense plays the man and the puck in their own zone. Texas's defense played off the man this year, more casual with taking the body and attempting to force turnovers. Dallas goes right at them and plays the man in the zone.

In the offensive zone, Pyle focuses a lot of time on cycling the puck in the corners and getting it back out to the D-men on the point. Coach Gulutzan is more likely to use the half-wall to make space on the perimeter.

Overall though, the game just feels more offensive focused under Pyle. Pyle was often quoted as wanting the players to "go" if they get the chance. It was clear the way they played that this was true. Texas finished with 2.95 goals per game, higher than Texas's 2.66 last season but lower than 2009-10's 2.98. The real difference was in the goals against at 3.30 per game. Previous finishes included 2.63 in 10-11 and 2.48 in 09-10.

A team commitment to defense was missing. Not all of that can be heaped on Coach Pyle though. It's hard to tell a player to follow one system when that player knows that a completely different system will be taught at the next level, which is where he wants to be ultimately. In the end, you wound up with those nights where the quote of the game was "We had some players buying in and some who didn't." That happened far too often this season.

It was probably unreasonable on the part of Dallas management to expect Coach Pyle to change his coaching style after twelve years of success in the ECHL. He only missed the playoffs three seasons in that span. Also keep in mind that Pyle was GM in addition to coach in the ECHL. He was able to choose players that complimented his system and, over the years, hone that system to a sharp edge. With Dallas, he walked into an already established personnel base and was unable to mold the group to fit his style for various reasons as we've discussed.

Now Dallas needs to seriously re-evaluate what they want from their minor league affiliate. If they want a team that very closely mirrors the systems of their major league club, they will need to find a coach who already plays that style. Asking someone to come in and change their stripes after decades in the business is not only unfair to the coach, but also to the players, fans and future of the franchise.
analysis coaching