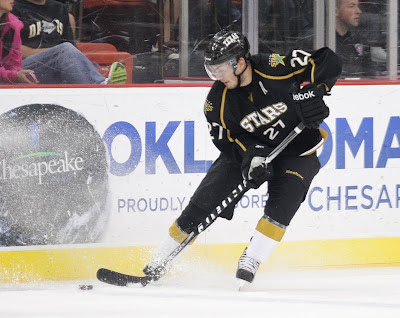 This weekend marks the last three games of the Texas Stars 2011-12 campaign. In a season without playoffs, we are certain that when the buzzer sounds on Sunday afternoon in Houston, the book will close on this year's edition of the Stars. As has been alluded to here, by the Texas Stars administration, and even by Joe Nieuwendyk, the Texas Stars will look drastically different in October. That means fans will be watching many of this year's Stars for the last time in a Texas uniform on Saturday.

I'm not going to get into the specifics of who I think is on the way out, who may already be gone and who might be back and why at this point. This post is more to remind you to take a few seconds on Saturday night to drink it all in. Many of the players on this year's squad who could be leaving have been with Texas since that very first game in October of 2009.

I was talking with some fans this past week about the slower decline of the Stars season this year. Texas has been out of the playoff race for a while, and so fans have known that April 14th would be the final hurrah for some time. In those fans estimations, it has given them more of a chance to begin 'closing the book' on the season.

If you remember back to last year, Texas was eliminated in a Game 6, on the road. Fans were hoping that they would see the Stars back for another two games at least in the second round. Milwaukee ended those hopes and made Game 5 the last game in a Stars uniform for favorites such as Greg Rallo and Aaron Gagnon.

Rallo and Gagnon bring up interesting points as well in the, let's call it, "grieving process" for fans. In retrospect, I think you'd be hard pressed to find a fan who still begrudges Rallo for leaving the team, even if it was to rival San Antonio.

Knowing now that he got the chance to play in an NHL game for the Panthers this season, you have to be happy for him as a person. You also should be proud that the Stars were the AHL club that picked Rallo out of the ECHL and gave him a chance at a full year's contract.

So when the Stars take the ice for the final home game this Saturday, take a few extra seconds to drink in the scene. Enjoy the eternal hustle of Francis Wathier. Admire those sometimes acrobatic blue line offensive zone keeps from Maxime Fortunus. Appreciate the ever-present grit, determination and leadership in captain Brad Lukowich's game. Nothing is for certain yet with these players (all unrestricted free agents*), but this summer I think you might regret not taking the second, if you don't.

* - I'm not trying to imply anything about these three players by listing them here. They are all unrestricted free agents, which means they can go wherever they want after the season is over. Also, they have all been with the team since the first season. Any of the three not coming back would be a tough loss for the fans. Just know that it is a possibility, just like it was with Rallo and Gagnon, and take that extra second to enjoy and remember on Saturday.
analysis