Season Recap: Who was the Texas Stars MVP?

Posted by Stephen Meserve on April 26, 2012
As the season is now clearly in the rear view, I wanted to take a little bit of time and recap some of the awards we've done here over the past few seasons, starting with who the Stars MVP was this season. I'll present the case for the top contenders and let you all fight it out in the comments, on Twitter and on Facebook. 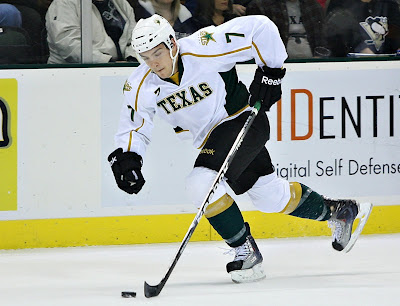 I've previously laid out the case that this was a career year for Colton Sceviour. His numbers speak for themselves. Playing in all but one of the Stars' games this season, Sceviour potted career highs in goals (21), assists (32) and points (53). He was one of the better players on the team at minus-8 and was constantly slotted on the top line, playing against the best the West had to offer this season (which was a lot).

Most remarkable among those stats was the impact of the tallies. His six game-winning goals amounted for almost 20% of the wins Texas got on the year period. He's money in the shootout, going 2/4 on the season, and scored on a penalty shot as well in the year.

Sceviour has become a true all-situations type player, something every player projected as an NHL third-liner should strive for. Additionally impressive to me this season was Sceviour's role as a veteran. We've previously discussed his role in bringing along the development of Scott Glennie while teamed up with Francis Wathier. It also struck me that Sceviour was mentioned by several of the ATO forwards as a vet player who helped them adjust to the pro game at the end of the season. 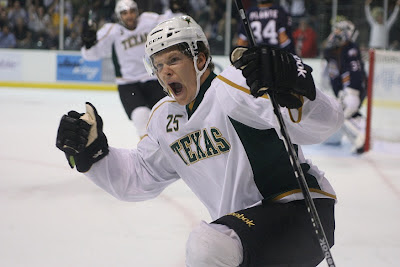 The Stars sort of used this picture everywhere, and why not? It's awesome. It was the photographer's computer background for most of the season. (Credit: Portraits by Deena)

How could you have an MVP conversation without including the team's leading goal scorer who also finished number two in league scoring as a rookie? That would be the bulk of the case for first-year man Matt Fraser.

Fraser has had quite the last 12 months. The undrafted forward led his WHL club, Kootenay, to the WHL championship and played in the Memorial Cup last May. After the season, he was signed to an entry level contract with the Dallas Stars and spent his first professional season scoring at will in Austin and elsewhere across the Western Conference. Fraser was named to the AHL's All-Star squad and was only beaten out for the goal scoring title on the final day of the regular season. (Cory Conacher notched a hat trick to make it to 39 overall.)

The obvious mark against him in this regard is defensive play. That was a problem for the entire Stars squad this season. The rookie did make huge strides in the back half of the season. At the end of December, he was at minus-11 but finished the season at minus-13 and even had a plus-6 month of March.

Fraser notched five game-winning goals and had eleven PPGs on the season. Fraser cooled off in 2012 on that mark though, as he only collected three PPGs from January on.

I think Fraser had a monster year and definitely a good one to build on. I don't think he's the MVP for this team this season, but he is definitely a nominee worthy of consideration. 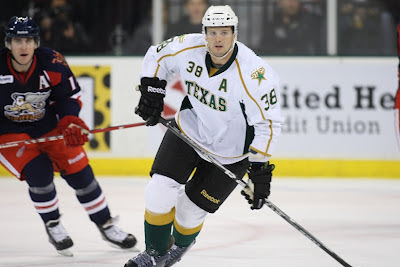 A constant competitor for his three years in Cedar Park, Francis Wathier deserves to be in the discussion for team MVP. Wathier set career highs in assists (24) and points (42). He only missed tying his career high goal mark of 19 by one. In a bad defensive year, Wathier was always strong on the backcheck, usually the first back to the zone among the three forwards, and finished with a team-best minus-4 (among players who were here all season).

Along with Sceviour, Wathier was a mentor for the younger players on the team. Glennie's physical tone had to have been picked up from Wathier, who seemed to know just when to go in for that big check and bring the fans and his team back into the game.

Wathier is another one of those every-situation players. He is always willing to go down to block a shot but was a workhorse for the Stars nonetheless, missing only one game this season. Additionally, he collected seven power play goals this season, second only to Fraser on the team.

Who do you think is the winner? Did I miss someone? Let's talk in the comments.
analysis