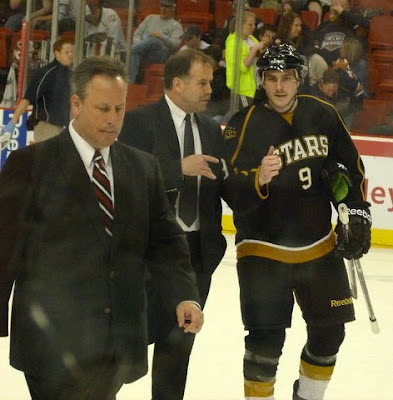 The Dallas Stars wasted no time this morning in beginning a changing of the guard in Austin. Less than 12 hours after the team returned to Austin for the final time, it was announced that both members of the Texas Stars coaching staff have been relieved.

“This was a tough decision but one we feel was necessary,” Dallas General Manager Joe Nieuwendyk told DallasStars.com. “Jeff Pyle and Jeff Truitt are true professionals and we would like to thank them for their service in Texas this season. We wish them the best.”

After making the playoffs two years in a row, Texas had the second worst record in the league this year and missed the playoffs for the first time in franchise history. Dallas has been saying for a while that there would be big changes this offseason. Keen (and even less-than-keen) observers have been assuming for a while that this would start behind the bench first.

Rumor was that Dallas was unhappy with the performance of the team for quite a while. The clash in playing styles also could not have helped the relationship. Coach Pyle's heavy forechecking system did not complement the style that Coach Gulutzan plays in Dallas. GM Scott White had stated strongly that his teams are usually built on solid goalies and defense, two of the worst aspects of Texas's game this season.

Texas has now had a 50/50 record on ECHL coaches. My bet is that Joe Nieuwendyk spends a lot of time looking at AHL and NHL assistants. The organization needs a coach who has a proven record of developing prospects to NHL success. That search will probably start in earnest once the playoffs are over.

On a personal note, Jeff Pyle was a great guy to work with from a media perspective. He was always a great quote and was more than willing to answer any question. He came out to take questions just as quickly after a 7-0 win as he did after a 6-1 loss. I've had a few interviews with him where the main content of the story was done in the first few minutes, and he spent twice as long just shooting the breeze with me about hockey. Coach Pyle had a lot of success in the ECHL, and I think he will find another job in hockey very soon. I wish him and Coach Truitt the best of luck.
analysis