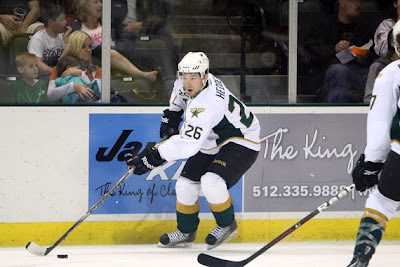 Mike Hedden had a goal and an assist in tonight's game. (Credit: Portraits by Deena)
Texas scored early and often in tonight's game against the Chicago Wolves, never looking back after opening a two goal lead in the first. Alex Chiasson and Jace Coyle each picked up their first professional goal. "We play for pride and give it all we've got," said Chiasson, who also assisted on the empty netter. "It was the best game we've played as a team since I've been here."

The Stars were up on Chicago by four before the Wolves got their first goal. Chicago, who could have clinched a playoff berth with a point in tonight's game, started former Star, Matt Climie, but pulled him after he allowed three goals on just eleven shots (Chicago backed into the playoffs thanks to Rochester's loss). Texas tender Jack Campbell picked up second star honors with a 34 save performance.

Texas opened the scoring in the first with Angelo Esposito tapping in a puck that had dribbled in between Climie's legs. Alex Chiasson followed up with a fantastic sweeping move down the right wing circle, crashing the net and poking the puck past Climie for a 2-0 lead. It is pretty obvious that size is a huge asset for Chiasson, who makes a lot of space for himself as he carries the puck.

The Wolves took a minor for elbowing and the Stars would go to the power play early in the second. A deft pass of only a few feet by Colton Sceviour changed the angle just enough for Climie that Tomas Vincour was able to rifle one past the tender. "You can see Vincour is a level up on everyone as he's been up in Dallas," said Chiasson. That would end the night for Climie and bring on Eddie Lack.

The Stars would pierce Lack just once in the game, but it was a big one for Texas's rookie blue liner. Jace Coyle recorded his first AHL goal with a slapper from the point that slipped in through traffic in front and the pads of Lack for a 4-0 lead.

Chicago brought their game up a notch in the final 24 minutes of the game. "We played to our game plan and were on them most of the night," said Dillon. "We weathered the storm in the third period."

Anton Rodin broke up the shutout bid with just over three left in the second. Jace Coyle got stuck with a two on one situation that Rodin finished off for the 4-1 score.

Nicklas Jensen, 2011 first round pick of the Canucks, added his first professional goal at 12:34 of the third to cut the Stars' lead to two. The Stars locked things down the rest of the way, however, earning a power play in the last 2:20 of the game to all but seal the deal. The Wolves would pull Lack for the extra skater, but Mike Hedden would collect his 17th of the year with just 1.5 seconds left.

Tonight's game was a little peak at what this Stars team could show next season. Something big that I noticed was a lack of what you'd call a "fourth line". There was a lot of skill on the ice for Texas and that matched up very well against the Wolves, especially with last change. When your "4th line" has over 70 points on the season, it's not even fair to call it a fourth line anymore. Perhaps this is why there was so much shuffling tonight. Lots of skill on the bench and Coach Pyle definitely wanted to get it all out on the ice as much as he could.

There was a lot of line shuffling, so I can't say that this is 100% accurate. Texas put all sorts of combinations out there to see what worked and didn't.