The Texas Stars PTO Problem; Or The Case for Dallas Stars Organizational Depth 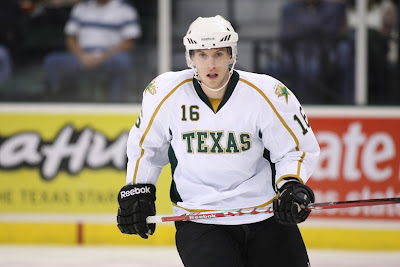 Scott Campbell, a PTO from the ECHL, with the Texas Stars this season (Credit: Portraits by Deena)

The Texas Stars signed a lot of PTO players this season. In all, Texas had more players suit up for a game this season (44) than in any other previous season. When players went down in Dallas or Austin, the cupboard was barer than bare in terms of ECHL or CHL callups. Dallas had just two players on contract in the ECHL this season, neither of which were called up for any games this season. When those injuries happened, Texas had to go the PTO route.

Overall, these seven PTO skaters factored into 55 games for Texas. In those 55 collective games, they had just three points, a goal off the stick of NHL vet Tyler Arnason in the first game of the season, a 7-0 win, and two assists from Brenden Connolly. The same seven players were minus-24, collectively making them the worst "skater" on the team in that category (minus-33 over 76 game season). While it probably wouldn't have been possible for a different setup of callups to completely turn around this season and place Texas into the playoffs, it was definitely a one of many factors contributing to the playoff miss and last-place finish.

It's been a while since the Idaho Steelheads were treated to a true NHL prospect that didn't wear goalie gear. The Boise faithful loved players like Tyler Beskorowany and Richard Bachman. However, there have been truly few players on contracts to Dallas spend significant time in Boise in the past few years. Michael Neal is the one player who has been there for a good period of time, but he is unlikely to be re-signed this summer. Mathieu Tousignant spent 20 games in Idaho in 2009-10.

Now I'm not saying that half the roster needs to be made up of Dallas contracts in the ECHL. That's not really possible even, given the 50 contract limit. What I am saying is that Dallas, and perhaps Texas to an even greater extent, needs to be concerned with making the depth signings.

I'll point to the case of Kael Mouillierat as an example of how such things can slip you by. Mouillierat played only six games for the Texas Stars in 2010-11 but collected two assists and, in my opinion, showed a spark of a lot more. Texas had an opportunity to bring Mouillierat on under an SPC for the 2011-12 season, especially since he had signed with Idaho again for this year. Mouillierat started the season with Idaho, but instead signed an SPC with the Bridgeport Sound Tigers after going there on a PTO.

So how does this change? The influx of young talent may be helping this cause this coming season more than anything else. Early numbers show that Texas could have an over-abundance of defensemen. Even without Lukowich or Fortunus re-signing, Texas could be sporting eight of their own. At least one of those will make their way down to Idaho and be a steady callup for Texas throughout the season. That is what was supposed to happen for Jace Coyle and/or Hubert Labrie for most of this season. Coyle's game likely suffered for it; he only made it into 48 games this season, where he probably should have seen ice time every night in Idaho instead.

This problem also gets better if Dallas signs a depth forward or defenseman to an NHL contract for the AHL team. That's sort of beating a dead horse around here at this point. Elite AHL scoring/defense is something this team needs badly to compete and teach the younger players how to be professionals in the league.

Over the next few weeks here, I'm going to break down the MVP and Most Improved Player races, along with my opinions on individual performances for the year. I'll also take an early look at the roster for next season, including best guesses on who is gone and who is staying.
analysis