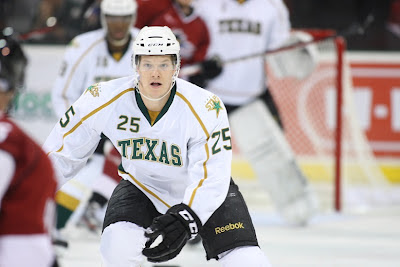 After two months in the last spot in the Western Conference, the inevitability of missing the playoffs finally was mathematically achieved this week for the Texas Stars (30-36-2-2, 64 pts, #15 Western Conference).

For Texas fans, it's a very strange sensation knowing that the season is over after game 76. There will be no second season this year in Cedar Park. Perhaps it has helped that the Stars have been in this spot for so long; the fans have had a chance to come to terms with missing the playoffs.

The players know that the fan support has been phenomenal given the on-ice product. "The fact that we still have 6,000 plus fans coming out to support us, it was a great crowd," said Luke Gazdic after Saturday's game. "For us to think it was loud [on the ice], it's rockin' in here."

Fans only got one win at home this weekend but had a lot to cheer for. Big game play from Jack Campbell and Austin Smith and re-energized efforts from vets including Travis Morin, Mike Hedden and Luke Gazdic.

"The young guys are energizing us," said Gazdic. "They've got legs for days."

Campbell's first pro shutout was arguably the best home game of the year for this crew. The fans were into it, chanting his name as they waited for his #1 star announcement and cheering every single save. After GAAs over three and save percentages under .900 all year, Campbell is a revelation in net. It is a credit to the fan base that they have recognized his skill so readily.

For now, the Stars play for pride, stats, contracts and the spoiler effect.