Vause Out for Season; Lukowich Named Stars' Man of the Year 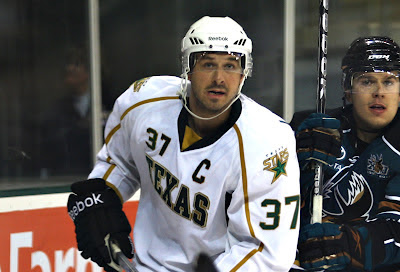 Just a few quick notes on an otherwise quiet hockey news day for the Texas Stars.

First, Taylor Vause headed back to his home in Calgary this morning. Vause broke his foot blocking a shot in Thursday's game against Hamilton. I really liked his game in the short time he had at Texas. Vause had 1-1-2 in just five games, including a shootout game winner at Lake Erie last week. He was a product of the Dallas Stars prolific WHL scouts and I am hoping that he will be back on an ELC next season. Coach Pyle indicated though that he has a decision to make. Vause could still attend college and may make that decision with his family.

Second, the AHL announced the AHL IOA/Specialty Men of the Year for each of the member clubs yesterday. For the second year in a row, it was Brad Lukowich garnering the honor for Texas. Lukowich and his wife Cara are extremely active in the community. I'll just simply link the release because there's just so much that he's done this season and the Stars did a good job of summarizing it in the release.