Why It's OK Austin Smith Didn't Win the Hobey 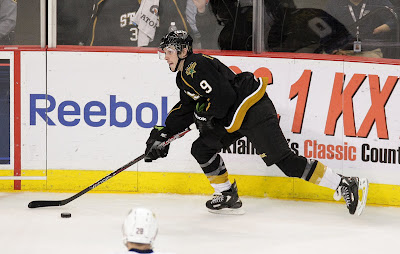 Former Colgate senior and current Texas Star Austin Smith did not win the Hobey Baker Award last night. Instead the award went to Jack Connolly, an undrafted forward out of the University of Minnesota-Duluth. It stings that Connolly beat out Texas-native Smith for the honors, but in the end, it may be better that he didn't win, especially in the context of the Dallas Stars system.

For those unfamiliar with the Hobey Baker Award, it is often called the equivalent of the Heisman Trophy in college football, but for college hockey. Previous winners that you might know include Ryan Miller, Chris Drury, Jason Krog, and Blake Geoffrion. Previous winners you probably don't know are the reason why it doesn't matter that Smith didn't win. In this way and a few others, it is probably more like the Heisman than anyone really lets on.

It is often said that the Heisman goes to the best player on a top 5 team. Also, it tends to go to a major BCS conference school. Here's a little example of what Austin Smith was up against.

Probably the best comparison would be to imagine Austin Smith as Case Keenum, the recently graduated quarterback from Houston of Conference USA. Houston is a school with a tier two status in terms of Texas football pedigree and plays in a conference that is not an automatic qualifier for the BCS. Keenum, however, put up fantastic numbers in his career there. Critics still maligned the level of competition he faced, which cast doubt on those numbers.

Now replace Keenum with Smith, Houston with Colgate and Conference USA with the ECAC. That's what kind of competition he was up against. UMD (Stanford in the above analogy) is a school with a much better pedigree and plays in the "more competitive" WCHA (Pac-12).

Additionally, the Hobey is not a sure fire indicator of future success (similar to the Heisman).

The real reason why it's alright that Smith didn't win the Hobey is the expectations game. The last two Dallas Stars prospects to win the Hobey, Junior Lessard and Marty Sertich, played a total of eight games in a Dallas Stars uniform, all Lessard's.

Again, this is an apt comparison to the Heisman Trophy. For every Tony Dorsett or Earl Campbell, there are many Troy Smiths, Eric Crouchs and Jason Whites. Now I will admit that the comparison breaks down a bit here because football players are drafted after college and hockey players are drafted at 18. However, having a crown placed on your head saying you're the best still weighs you down whether you were already drafted or not.

So for now, Texas Stars and Dallas Stars fans should be happy that a native Texan was in the top three finalists for the Hobey Baker Award. It puts a spotlight on the good work that Dallas has done in the Metroplex and the state the raise awareness of hockey and create youth programs from whole cloth. After all, maybe Jack Campbell put it best in his tweet last night: