Why This Should Be Colton Sceviour's Last Year With Texas 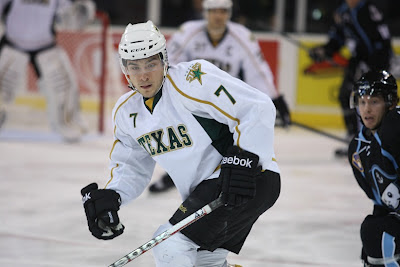 Sceviour is a third year pro and is ready to move on, inside the organization or possibly outside. (Credit: Portraits by Deena)
Three years ago, Colton Sceviour joined the Texas Stars in their first season. He was a rookie on his second year of an entry level contract and looking to make an impact on the new team. Playing third line minutes, Sceviour potted nine goals and 22 assists in 80 games. He played in all 24 playoff games and picked up a goal and seven assists. The second year, he would increase his totals to 16-25-41, and this year in 71 games, he has 21-30-51.

At the end of this season, Sceviour is a restricted free agent, giving Dallas first right of refusal on his contract status. Dallas should either sign Sceviour with the intent of keeping him in the NHL or let him go to a team that will.

Number one has to be defensive responsibility. You don't want your third and fourth lines costing you goals. Sceviour has this. Despite his minus-8 this season, he has been put on the ice in tough situations. The minus-8 is not an indictment of his defensive skill, but a testament to it.

Along those lines, a nice bonus is the ability to play the PK. Sceviour has done this with facility over the past two years. It was a stated goal of his to be a contributor on the PK in year two, and he is now a go-to guy, playing the 3-man PK as well.

It's tough to judge the turnover numbers for players in the AHL, since those numbers aren't publicly available if they're even kept. Both Coach Pyle and Gulutzan's willingness to put Sceviour out in hard situations show that he is trusted with the puck defensively.

You're also going to want someone who isn't afraid to take the body and go to the hard areas of the ice to make plays. We've talked about it before here, but playing with Sceviour and Wathier is the main reason that Scott Glennie has added physicality to his list of traits. Sceviour played those rough and tumble minutes often in his second year, lining up with Mathieu Tousignant and Ray Sawada frequently.

Finally, having a good set of hands doesn't hurt, so you don't freeze up when presented with a good scoring chance. Twenty-one goals on the season say that Sceviour is not going to do that. Additionally, he has had a knack for key goals, scoring six game winners. That's six wins out of the thirty total the Stars have this season.

His point generation has ticked up as well with a career high in assists. While a bottom six player is going to get limited offensive zone start and time, you want them to make the most of it.

For all these reasons, Colton Sceviour is ready for the big show. Dallas needs to recognize this and sign him with the intent of keeping him in the NHL this season. At worst, he is a drop in replacement for a fourth liners Toby Petersen or Jake Dowell and probably for $300,000 less. At best, he could be a third line winger who can take faceoffs and play the penalty kill for Dallas.

At minimum, Colton should look for a two-year deal that is two-way the first year and one-way the second (Similar to what Aaron Gagnon got in Winnipeg). That shows that Dallas sees him in the NHL soon and could potentially keep him there in 2012-13 if he shows well in training camp. If the team offers another one-year, two-way contract without much hint of NHL time, that is where the trouble comes in. Since he cannot go on the free market due to his restricted status, Sceviour would "waste" another year with Texas, instead of in the big show.

If Dallas doesn't see themselves keeping Sceviour in the Big D this year or next, they shouldn't tender him a qualifying offer this summer, making him a UFA and allowing him to find NHL work somewhere else. It is a tough pill for fans to swallow surely, but he is ready and deserves the shot somewhere, even if it isn't Dallas.
analysis free agency