With Texas Out of the Playoffs Officially, What Now? 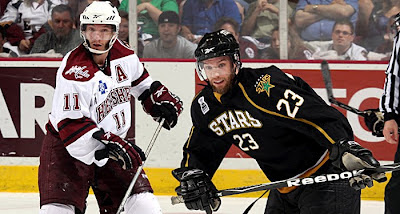 Remember this? Not happening this year. (Credit: JustSports Photography)
Realistically, it had been inevitable since late February. Yesterday, inevitable became actual. With the 8-4 loss to Lake Erie, Texas was mathematically eliminated from the playoffs.

It's a weird feeling for Texas Stars fans. After two years of success in the regular season and a berth into the "second season", it's not going to happen this season. Texas will suit up for the last time on April 15th in Houston, and that will close the book on 2011-12.

Perhaps it is a little easier to digest for fans since the Stars have been out of the hunt for so long. If the elimination came on the last day of the season (a la Dallas 2010-11), this would be a huge heart breaker. It feels like the fan base has come to terms with the situation slowly and is looking towards next year.

So what is there left to play for in what many consider a lost season for this AHL club?

The first answer is obvious. Texas is playing for next year's development and team dynamic. The young guys are here to get a little taste of the pro ranks before joining full force next season. What they have shown so far gives fans promise that Texas will be better next season. Other prospects on the horizon for next year but still playing in juniors give hope for the blue line as well, but that's a topic for another post.

Second, several players have talked about pride. After yesterday's loss, Mike Hedden called the performance "embarrassing". At the end of the day, these are very competitive people on the ice no matter the score or playoff situation.

Another, more cynical, point is the matter of contracts. While it's usually a faux pas to bring up what people make in polite conversation, for professional athletes, contracts are a huge talking point and a big part of the story.

Several Stars are on contracts that expire at the end of the season, including Colton Sceviour and Luke Gazdic (NHL) and Mike Hedden and Shawn Weller (AHL). If they want to make their value evident, they know that recentness is just as compelling as quantity in terms of accomplishments. I'm sure he wouldn't admit it openly, but Hedden has to know that his five goals in the last six games are greatly enhancing his viability for another AHL contract with the Stars or another team.

Finally, and this is the one you'll like, several players have said that they want to play out the season strong for the fans. The players realize that it has been a tough season for the fans, and they know that it's amazing for 6,000 plus to show up for a game after the season they've had. In this weekend's interviews, Hedden and Gazdic both commented that they wanted to have a great finish to the season "for the fans".

As we wind down the last two weeks of the season, don't forget that 100 Degree Hockey doesn't go away when summer starts. There are so many things to discuss: a debrief of the season, including MVP and Most Improved Player Awards, a huge discussion of what happens with all these players next season, and keeping tracks of Stars' prospects in Canadian major junior playoffs (along with the AHL playoffs).
analysis