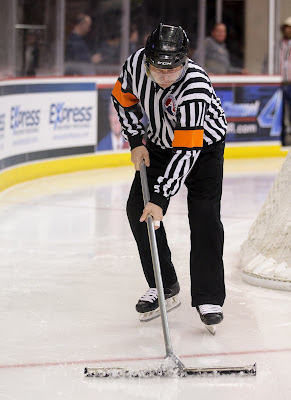 The AHL's Board of Governors meetings concluded today and the league announced numerous changes to the league coming out of the meetings. The headliner for many NHL fans is the addition of hybrid icing to the AHL game. As a possible precursor to addition to the NHL, the AHL will be testing the rule.

Here's the section of the league release pertaining to that:

The Board has also approved a test of a variation on Rule 81 (“Icing”) at the request of the National Hockey League, that will, in the event of a potential icing violation, complete the play should a defending player be the first to reach the end zone face-off dots and provided the puck has crossed the goal line at that point. This rule will be in effect until Nov. 19, 2012, at which time its continued use will be determined by the Board. This was the only rules test approved.

I'm interested that the rule will change, potentially, one month into the season. This rule has the potential to reduce dangerous collisions in the race for a puck at the goal line. I hope it is successful.

The headliner for AHL fans is the addition of video review to the league. According to Kevin Oklobjiza of the Rochester Democrat and Chronicle, "[one] camera, above net, referee is judge, replay controls at ice level, monitor in penalty box (as in college). #AHL video review is totally referee's discretion. Coaches can't demand review. Likely won't be able to use TV/in-arena cams for extra view."

The reaction has been overwhelmingly positive to the announcement from players to fans to even goal judges.

Elsewhere, Texas "changed" divisions as the AHL renamed the West Division to the South Division. The Stars are joined in the division by Houston, San Antonio, OKC and Charlotte. Charlotte left the Midwest and moved to the South, displacing Abbotsford. Stars players have to be happy about that. Texas usually flew into Seattle to avoid costly international flight travel and bused to Abbotsford. On the other hand, no Timmy's coffee in Charlotte, so there's that.

The AHL also adopted two rules changes from the NHL for next season:

• Rule 67.2 (“Handling the Puck”) now calls for a minor penalty “any time a player places his hand over the puck while it is on the ice in order to conceal it from or prevent an opponent from playing the puck”.

• Rule 76.4 (“Face-offs”) states that “both players facing off are prohibited from batting the puck with their hand in an attempt to win the face-off.” Violation of this rule will result in a minor penalty for delay of game.

Final thing to note, the AHL also announced today that the season will end on April 20th this season, five days later than this year. For comparison, Kevin O. reminds us, "In 1957, the Amerks lost final game of Calder Cup finals April 17."