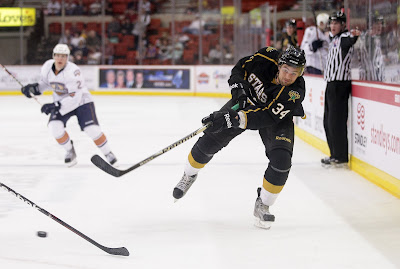 The Dallas Stars announced today that they have extended six qualifying offers to restricted free agents in the system, including several who spent significant time in Texas this year. The following players were tendered qualifying offers:
The Stars did not extend QOs to Angelo Esposito, Mikhail Stefanovich, Michael Neal and Jake Hauswirth.

Teams are required to extend a one-year “qualifying offer” to any current restricted free agent by June 25 in order to receive the right of the first refusal or draft choice compensation should that respective player sign an offer sheet with another NHL club. The qualifying offers will expire at 4 p.m. (Central Time) on Thursday, July 15.

1. A player whose prior year salary was equal or less than $660,000 must receive a qualifying offer of 110% of their prior year’s salary.

3. A player whose prior year salary was more than $1 million must receive a qualifying offer at 100% of their prior year’s salary.

The chief RFA concern for the Stars is Jamie Benn, who will not get one of these one-year contracts, but instead a longer term deal. Notably absent is Tom Wandell, who the Stars have not yet made a decision on. Philip Larsen is also absent from the list but is expected to get a deal done. Teams have until June 25th to extend qualifying offers.

The players extended QOs are not surprising. The only one that was on the fence was Esposito, and while he played well in the back half of the season, he needed to show more to earn a roster spot. When you've got a fifty contract limit and some highly touted prospects entering the system, you can't take a contract and roster spot up with a player who has not shown he is going to play in the NHL.
dallas stars free agency player contracts