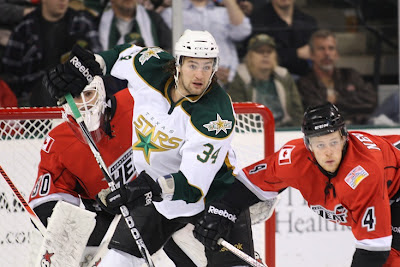 Late on Monday, the Dallas Stars announced the re-signing of forwards Luke Gazdic and Ryan Garbutt and the signing of new draftee defenseman Ludwig Bystrom to a three year entry-level contract. Gazdic and Garbutt were both restricted free agents at the end of the 2011-12 season and were both tendered qualifying offers. Garbutt signed a two-year one-way deal, while Gazdic signed a one-year two-way deal. 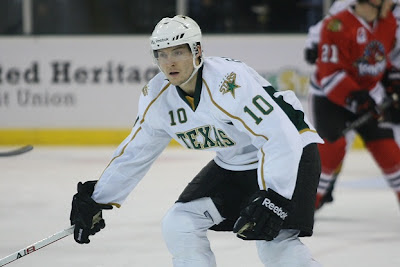 If Garbutt is assigned to Texas, which could be possible but I think unlikely, fans know what to expect. Hoping that penalty trouble is resolved after time in the NHL, Garbutt can be counted on for high-energy play in the top two lines. Surely Texas would also love to have his shorthanded tenacity back on a pairing with another shorthanded beast like Mike Hedden.

Meanwhile, the Stars wanted Gazdic to focus on playing between the whistles last year, and he had a career year in terms of offense, collecting 11-12-23 while only tallying 102 minutes of penalties, a career low. After a minus-22 in 2011-12, the next step for Gazdic is to tighten up the defensive side of his game. The last thing you want from an energy forward is a defensive liability. It's the next logical step in the growth of his game.

This leaves Jordie Benn as the last RFA with a qualifying offer expected to play in Cedar Park not to have signed with Dallas yet. His brother, Jamie, the other big fish on Dallas's radar.