Jack Campbell Looking to "Be In Control" During First Pro Season 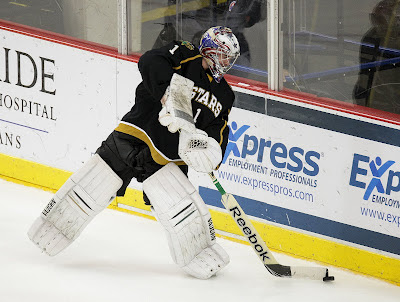 Jack Campbell handles the puck behind his net in a March 23rd game at OKC (Credit: Steven Christy)

Goalie Jack Campbell was among many of the players at Development Camp this month expected to spend most, if not all, of the season in Cedar Park with the Texas Stars. Campbell started the last 12 games of the 2011-12 season for Texas and quickly became a fan favorite.

"I just really enjoyed it. It was a great experience; the fans were awesome."

Campbell has spent the summer preparing for his first full professional season after leaving the OHL's Soo Greyhounds at the end of last season. The American-born tender put himself through a "pretty tough" training regimen leading up to camp, lifting in the morning and skating and yoga in the afternoon six days a week.

Goalie coach Mike Valley had Campbell, Christopher Nihlstorp and Tyler Beskorowany working on their own during the Development Camp sessions. Nihlstorp is expected to pair up with Campbell in Texas in net. "[Christopher's] another great guy," said Campbell. "Dallas has a lot of great character and it's great to meet new people. He's pushing me out there along with Tyler."

The game was really quite different for Campbell between the OHL and AHL. He noted that the game style is a lot faster and shots came quicker and harder.

"At the same time, I felt like I could elevate my game. Now I'm trying to slow it down and be more in control. I feel like I'm getting better."

Campbell will continue his training this summer in Windsor, Ontario, before undoubtedly heading to the Traverse City Tournament in September (if the CBA is resolved).

Wherever he ultimately ends up this season, and whenever that season may ultimately start, Campbell knows he has a welcome home in Cedar Park.

"My goodness, [the end of last season] was awesome. Being an American, I felt like the fans welcomed me with open arms, more than most, perhaps. The fans were loud. I had no idea they were so passionate about their hockey. For them to come out and support us like that even though we didn't make the playoffs, that was awesome. I'm just really looking forward to the next season."
development camp interviews