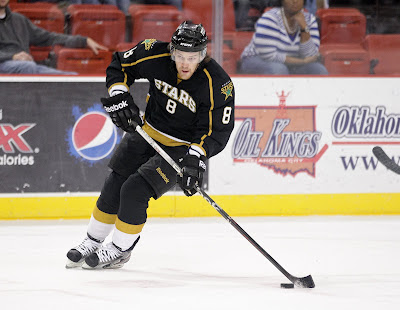 The title really says it all for this one. Defenseman Jordie Benn was sent a qualifying offer this summer and signed a one year, two-way deal with the Dallas Stars today for the 2012-13 season. He should be in Cedar Park for most of the season but could be the first callup for the NHL club in case of injury. Jordie is another great story from the CHL for Dallas, along with Ryan Garbutt.

The Dallas Stars announced today that the club has signed defenseman Jordie Benn to a one-year, two-way contract for the 2012-13 campaign.

Benn, 24, earned an assist in his NHL debut last season, becoming the 10th player in Dallas Stars history to record his first NHL point in his first NHL game. Along with younger brother Jamie, they became the third set of siblings in Dallas Stars history, and the sixth in team annals, to play in an NHL contest together. In total, Benn collected two assists in three games with Dallas in 2011-12.

The 6-foot-1, 200-pound defenseman played a majority of the 2011-12 campaign with Dallas’ development affiliate, the Texas Stars, where he ranked first among team defensemen in goals (9), power play goals (5), overall points (32), and was tied for first in assists with Brenden Dillon (23).

The Victoria, BC native was undrafted and signed with the Stars as a free agent on July 1, 2011. He spent the 2010-11 season with Texas (AHL), recording 12 points (2 goals, 10 assists) and 39 penalty minutes in 60 appearances. In 45 games with the Allen Americans of the Central Hockey League in 2009-10, he posted 18 points (9 goals, 9 assists) and 55 PIM. He also collected 11 points (2 goals, 9 assists) and 12 penalty minutes in 20 playoff games with the Americans that season, as Allen advanced to the CHL Finals before falling in six games at the hands of the Rapid City Rush.