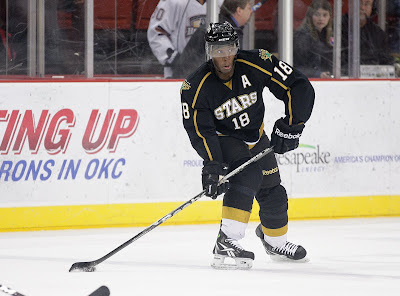 Despite all signs initially pointing to no, the Stars have re-signed Maxime Fortunus on a one year, two-way deal. Fortunus is the club's all-time leader in defenseman games played, having started with the club in its inaugural season of 2009-10.

Fortunus will be a huge veteran presence in the locker room for the Texas Stars, along with Tyler Sloan. The right-handed shot out of Quebec had six goals and fourteen assists last season. With the signing, Texas now has either 7 or 8 defensemen for their roster (depending on whether you want to count Brenden Dillon)

Note that my pairings here are not "real".

I'll admit that my initial leanings on this were incorrect. Rumour was that Fortunus was not happy with how the season went last year and was going to entertain other offers. Perhaps he did and wasn't happy with what he saw. I think the changes over the summer should show that the organization is committed to a culture change. I would also assume that when the details show up on Capgeek that he got a nice pay bump at the AHL level, commensurate with his veteran experience.
dallas stars player signings