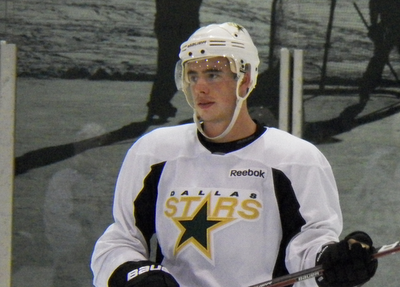 Most young hockey players' sibling rivalries never leave the local hockey rink. As they ascend through hockey, fewer and fewer brother pairs make it to the next level. Only 259 sets of brothers have played in the NHL, and the Stars' Reilly Smith and Red Wings' Brendan Smith are in that select group.

But before the two could potentially face off four times a year in the NHL, both needed some seasoning in the AHL. Brendan's prior experience with the Griffins over the past two years has helped reinforce the importance of the AHL to Reilly.

"[Brendan] actually found that playing in the AHL was a lot harder grind than he thought it would be," said Reilly last week at Development Camp. "There's a lot of travel, and it's a lot harder than you think. It helped his game and made him stronger mentally. The AHL pointed out the weak areas of his game. We've talked a lot about it, almost everyday."

Brendan and Reilly never played together as kids due to their age difference. Their best chance, with the OPJHL's St. Michael's Buzzers, did not come to fruition as Brendan left the club to play for the University of Wisconsin in 2007. Instead, Reilly joined his eldest brother, Rory, for that season with the Buzzers. Rory is now a professional lacrosse player with the Colorado Mammoth.

Reilly went on to attend Miami of Ohio from 2009 to 2012. In his final season, he was among the top ten finalists for the Hobey Baker, scoring 30 goals and 18 assists in just 39 games. After leaving Miami, he played three games for Dallas before the end of the season. "[The NHL] was like night and day from college. As soon as I left, I knew I had a lot of work to do."

And the AHL is a great place to learn some of those skills.

"When I finished the year with Dallas, they said there were no guarantees. You're competiting to make the team just like everyone else. It's was a good experience and is helping me to push myself more."

As part of that regimen to make himself better, he has been working out with Brendan in the weight room this summer. They are distinctly aware that they could face each other for the first time either in the AHL or NHL this season.

"We're pretty competitive with each other. There's always that possibility that we'll play each other," said Reilly. "It'll be pretty interesting how it all works out. Backyard games of hockey were always competitive and I'm sure this would be no different."

Between his new teammates in the Dallas organization and his Red Wings prospect brother, Reilly knows that if he does end up in Cedar Park it's a great place to start out his career.

"Austin [Smith], [Brenden] Dillon, [Scott] Glennie and I have talked a lot about Cedar Park. They said it's a great atmosphere, and everything is awesome down there. My brother said it's one of the best places to play in the league."
development camp interviews