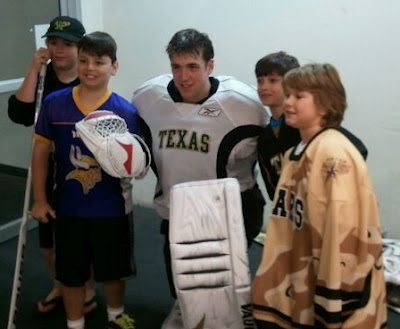 Tyler Beskorowany takes time to pose for a picture with some young fans after practice at the Chaparral Ice on I-35 during the 2010-11 season. (Credit: Bill Harris)

Last season, the Chaparral Ice location on I-35 closed its doors and has since been purchased and renovated to no longer function as an ice rink. As the below release states, the Stars have an interest in ensuring there is more than just one ice sheet in the Austin area available for amateur hockey.

In the 2011-12 season, the CPC opened its doors to the adult amateur community for a Spring draft league. This partnership looks to continue and extend that relationship through the existing Chaparral Ice league infrastructure.

“With only one full-time, full-sheet of ice available in the Greater Austin area, we felt it was imperative to coordinate our efforts with Chaparral Ice to maximize the amount of ice available for not just youth and adult hockey, but also all ice sports,” stated Texas Stars President Rick McLaughlin. “Additionally, through our agreement with Chaparral Ice, we anticipate the Texas Junior Stars program will continue to grow and thrive.”

The agreement covers the managed scheduling of ice time at Cedar Park Center by Chaparral Ice to enable full hockey league activities in the Austin area. In addition, Chaparral Ice is the home of the Texas Junior Stars program.

Chaparral Ice is a family-owned business that is home to approximately 20 youth teams, from recreation through high school to competition/travel hockey teams, with over 250 boys and girls ranging from ages four to 18. The facility is also home to over 400 adult league participants across 8 leagues. In addition to year-round hockey, Chaparral Ice is home to the Austin Figure Skating Club, Stars of Austin Synchro Team, Capital of Texas Figure Skating Club and the Lonestar Curling Club. The facility is also available for public skating, corporate events, broomball, and hosts year-round skating and hockey classes.

“Chaparral Ice is excited about our new relationship with the Texas Stars and Cedar Park Center,” said Angie Vaught, General Manager of Chaparral Ice Center. “This relationship will allow us to offer additional programs and ice time not only to our current players and skaters, but to the growing skating community in Central Texas as well. We will be able to meet the needs of all our programs for the 2012-13 season, and we look forward to the opportunity to expand the presence of ice sports in the Cedar Park/Leander area. We feel our partnership with the Texas Stars and Cedar Park Center will be vital to the growth of hockey and figure skating in the greater Austin area.”