Posted by Stephen Meserve on September 04, 2012

Currently down to just one public ice sheet, the Austin area will be doubling its hockey capacity this winter thanks to Jamie Matthews and the Pond Hockey Club. Just a few minutes north of the Chaparral Ice facility at Northcross, the Pond Hockey Club should be opening a 140 foot by 70 foot ice sheet in the December/January timeframe.

"We Were Addicted to Hockey"

The journey to open the facility started with a trip to Colorado for the Matthews family. "About a year and half ago we were on vacation in Colorado and went to the local rink, [my son] saw the kids out on the ice tearing it up and he said, 'Dad, I want to do that.'"

After returning to Austin, the entire family became engulfed in hockey. All three kids and Jamie himself learned to play the sport at the Chaparral Ice in town. The family even picked up a season ticket package to the Texas Stars. "Our middle daughter actually scored her first goal during the intermission at a Stars game."

But then, last spring, the closure of the Chaparral Ice facility on I-35 brought the number of available ice sheets in town from three to just one.

"We started hearing the rumors about Chap closing just as we were getting addicted to hockey."

On travel team trip to Dallas, Matthews and a group of parents visited the Hockey Ambitions training facility in Frisco, Texas. Hockey Ambitions features a 120 foot by 60 foot rink and focuses their facility on training and skills-building. The parents agreed, "Why can't we have this in Austin?"

As you may know, a typical regulation ice sheet measures 200 feet by 85 feet. A pond hockey rink shrinks the neutral zone and maintains the size of the attacking zones to maximize the attacking ice time. Also, typically, hockey games on pond hockey sheets are only played 3-on-3 with a goalie or 4-on-4 without goalies. According to Matthews, these changes allow the average player ten times the number of shots per game and three times as much ice time per hour.

"I know a lot of players who play as much as they can and can't practice," said Matthews. "They can't make it to stick and puck at lunch time and that's not Chaparral's fault. I'd like the beer league players at Chaparral to see our rink as an opportunity to [build their skills and] move up a league, eventually." 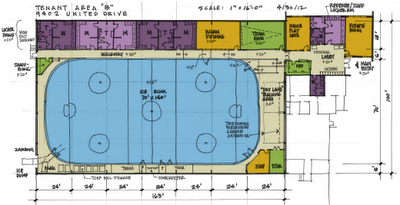 Site layout for the Pond Hockey Club. Click to enlarge.

In addition to the player benefits of the smaller sheet, the initial construction costs are not as high either. A two-thirds size rink is half the cost of a full size sheet. The group has first-rights on the adjacent building, allowing them to expand and build a full sheet in the future if their initial project is successful.

The rink will also offer skate sharpening and a vending machine for hockey staples like laces and tape.

In addition to 3-on-3 with goalies and 4-on-4 without, the group is looking to get creative with their offerings.

"We're trying to follow Chaparral's advice on what leagues they would offer if they could, but they just don't have the ice time."

For example, the group is trying to add a women's league and an over-50 league to the mix. A mixed skill league is expected in addition to A/B1 and B2/C leagues.

Matthews says they'll start there, but "I'm a big believer in letting the players tell us what makes the best facility and leagues."

Pond hockey games are expected to run two 25-minute halves with a running clock. Due to the smaller ice and few players, these are often high scoring affairs. "One of the games I saw in Frisco was 11-9 just 15 minutes in." The games will likely feature a single referee and scorekeeper and a predictable schedule.

"The league will be predictable so people can block out their schedule. For example, you'll have games on Tuesdays and Thursdays every week at 7:00 or 8:30."

Originally scheduled to open in August, the facility has had a few delays thanks to zoning change and permit requests at the city of Austin.

"We are in the waiting line at the city of Austin for our permits. What is normally a 4-6 week process is now a 4-6 month process. Our original opening date was August 15th. Builders are estimating a 3 month buildout, which will put us in December to January."

The group is taking a long-term view of the plan though, which helps to keep their frustration about delays in check. "It's frustrating, but three years from now it won't matter that it took an extra four months to launch. We just need more ice."

Keep up with the Pond Hockey Club's progress at pondhockeyclub.com.
hockey in austin human interest interviews