Posted by Stephen Meserve on September 30, 2012 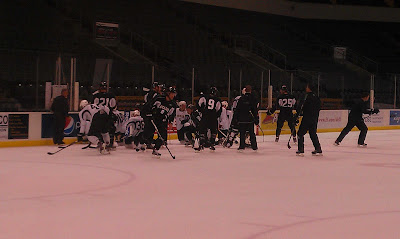 The Texas Stars opened training camp Friday night and participated in their first official on-ice activities on Saturday afternoon. The morning was spent with physical testing, including fitness and concussion baseline tests. Saturday's afternoon practices were broken up into Team White and Black. Sunday, the two teams scrimmaged in the afternoon.

It's tough to get huge sweeping impressions with just two practices and a scrimmage in the bank. The first two days were very pacey though. There were a lot of uptempo drills and drills to get the players' feet under them. "There wasn't a lot of structure [in the afternoon]," said veteran forward Colton Sceviour. "It was just a little bit of stuff to get your feet moving."

"If someone wasn't in shape coming in," Francis Wathier added. "Now they know it."

My thoughts on various different players in camp, remembering that this is only based on two practices and a single scrimmage.
Here's the roster breakdown:
training camp