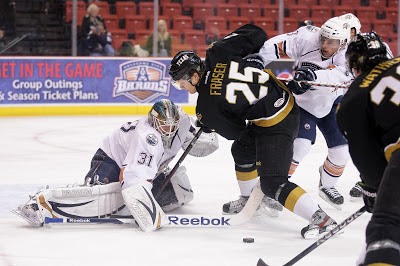 Unable to watch last night's game, so I've got limited visibility to this one.

Texas dropped a 4-2 decision to the OKC Barons on Sunday. It was the fourth time in seven games that the Stars pulled their starting goalie in favor of that night's backup. In each of those games that I've been able to view, the difference has been shot quality and letting in the "easy ones". Either the Stars weren't playing well enough defensively in front of the goal, allowing very difficult shots in that never should have been taken or could have been blocked, or Texas goalies allowed simple shots to beat them. Two of Nilstorp's goals against on Sunday were on slapshots with zero traffic.

The Texas Stars had the edge in shots on goal, but two power play goals from rookie defenseman Justin Schultz was the difference as the Oklahoma City Barons earned a 4-2 win Sunday afternoon at Cox Convention Center.

The Barons opened the scoring at 7:31 of the first period as they caught the Stars in the middle of a line change. Dane Byers took a long pass into the offensive on a partial breakaway and unleashed a powerful slap shot from the top of the left faceoff circle that beat goaltender Cristopher Nilstorp to the far right post. Texas answered back 93 seconds later as Francis Wathier stole a clearing pass in the offensive zone and found Matt Fraser for a one-timer at 9:03; Fraser’s first of the season. Taylor Vause took the game’s first penalty, a tripping call at 11:04, and exactly one minute later Barons’ defenseman Justin Schultz shot from the point took several deflections before finding a way to tuck inside the right post. The power play goal gave the hosts a 2-1 after one period of play.

Anti Tyrvainen scored at 2:24 of the second period, sending a slap shot from the left half-wall off the inside of the right post for a 3-1 Oklahoma City lead. After Tyrvainen’s goal Texas replaced Nilstorp in goal with backup Jack Campbell. The Stars rallied again, drawing back to within one as Antoine Roussel sent a clever backhand pass from behind the net to Cody Eakin for a one-timer just above the top of the crease. The goal was Eakin’s fourth of the year and it was assisted by Roussel and Tomas Vincour at 5:51. The Barons regained their two-goal lead at 13:06 with another power play goal from Schultz, his second of the game, and they carried a 4-2 lead into the third period.

Texas mounted a fierce effort to try to comeback in the third period as they out-shot their hosts 14-2 in the final twenty minutes of play, but goaltender Olivier Roy kept the Stars at bay and helped the Barons hang on for the victory.

Roy finished the game with 27 saves on 29 shots to record his second win of the year in goal for Oklahoma City. Texas starter Cristopher Nilstorp took the loss, stopping 9-of-12 shots faced in the first 22:24 of action; Jack Campbell had 6 saves on 7 shots over the final 35:46 in relief. The Stars out-shot the Barons 29-19 in the game and went 0-for-2 on the power play; Oklahoma City was 2-for-4 with man-advantage.

Alex Chiasson was out with the flu again. Scott Glennie out again for the seventh game.