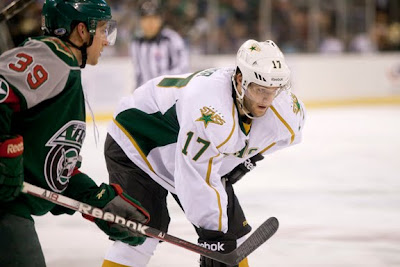 Tomas Vincour had a goal and an assist in tonight's game. (Credit: Texas Stars)

Texas dropped to 2-2 on the season with 5-3 loss to the visiting Houston Aeros tonight. For the second night in a row, Texas took too many ill-advised penalties and it ended up costing them on the score sheet. Houston had three power play goals on the night.

"They scored on their opportunities," said Coach Desjardins. "It's a game of inches. We were just slow tonight."

Despite only losing the shots battle 31-27, Texas's shows weren't finding the net like Houston's. "We tried to be cute and force plays and had a few too many turnovers," said forward Cody Eakin, who scored shorthanded in the third. "We want to cuase traffic and a lot of the shots we weren't doing that."

Jack Campbell took the loss with four goals on 12 shots. Cristopher Nilstorp came in to relieve with 18 saves on 19 shots.

The Stars let an early one by the start the game. Nick Palmieri had the goal off a point shot by Drew Bagnall. The play generated off a miscue by Tyler Sloan, failing to take control of the puck below the red line and clear the zone. Texas got it back three minutes later as a hard-charging Tomas Vincour scored five-hole on Kuemper coming from behind the net. Only 61 seconds later, Mikael Granlund scored his first of the year for Houston after winning a puck battle with the Stars' defense.

The second period was where things got out of control. With the Stars killing a Reilly Smith hooking minor, Francis Wathier took an interference penalty. Houston went 6-on-4 as Texas struggled to control the puck. With one second remaining in Smith's minor, Houston scored off the stick of Palmieri. Wathier's penalty still needed to be served in its entirety. Houston also scored on that power play to set the score at 4-1 and end Jack Campbell's night.

"We had 10 shots against," said Desjardins. "Sometimes it's not the goaltender's fault; you just need a change to get momentum."

With Nilstorp in net, the Stars set out to claim that momentum, earning a power play in the fourth minute of the period. Jordie Benn's point shot was tipped by Travis Morin to set the deficit at 4-2 for Texas. The goal was Morin's first of the year.

Houston reclaimed their three goal lead before the end of the period, again on the power play. Kris Foucault was left all alone on the backdoor and roofed one past Nilstorp for the 5-2 lead.

Penalties were definitely a stroyline for Texas, even though the club only gave up four power plays. Houston was 3/4 on those opportunities. Eakin added, "Our game plan is four [penalties] a game per less. When you aren't moving your feet, that happens."

The Stars would add a third, but ultimately inconsequential, goal in the final minute of the game. Cody Eakin broke in shorthanded with Brenden Dillon and Vincour, finding twine for his third goal of the year and second shorty.

Coach Desjardins on dressing seven D:
"Tyler Sloan's a good player for us and we needed to get him into the lineup."