Posted by Stephen Meserve on October 18, 2012
I had the opportunity to sit down for an extended interview with the Texas Stars General Manager and Dallas Stars Director of Minor League Operations, Scott White. This is the second in a multi-part article about his history, time with the Stars and the role of an AHL GM. You can read part 1 here. In Part 2, we’ll discuss the lessons learned in the losing season, the role of an AHL GM and hopes for the future.

Lessons Learned in a Losing Effort 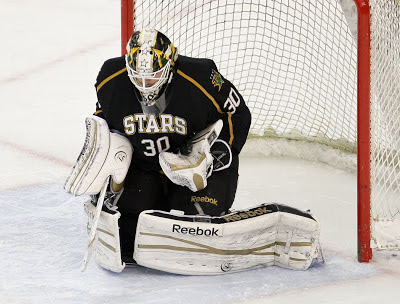 After a fantastic first season and a solid second season, the Stars suffered their first losing season in Texas, finishing second to last in the league and last in the conference. While it may seem that the 2011-12 season was a lost one for the Texas Stars, White believes that the players develop win or lose.

“Obviously, if the winning were there, your players would develop in the premier situation, but nonetheless, players still develop.”

While the GM certainly would have preferred a playoff berth, he acknowledged the silver lining: Jack Campbell and Austin Smith would never had played the valuable minutes they did if the Stars were in the thick of a playoff run.

His biggest lesson learned from the losing season was found between the pipes.

“The internal competition level in the net wasn't good enough. It's important to have a depth. Not just because you might need a guy to open the door in Rockford, Illinois, on January 21st because some guy came down with the flu, but also because he might be able to play five or six games for you and win some of those.”

White feels that the depth in net this year will help to prevent those same problems from cropping up in the 2012-13 season. White added, “Tyler Beskorowany needs to be the best player in the ECHL to be ready for a potential callup. You never know when injuries might come.”

On the topic of the ECHL, White is an adamant believer in the value of the league, being a product of it as a player, coach and GM. Having an affiliate you can trust is a huge part of it, and Idaho has the GM’s seal of approval.

“It's unbelievable important to have an ECHL affiliate you trust. I respect the ECHL because I played there and I coached there. I know what they go through.”

White expects to send more players to Idaho this season with the lockout pushing NHL-ready players to the AHL. Meanwhile, Texas is also affiliated with the Allen Americans of the Central Hockey League. Sending players to the Metroplex for development has been less common for the Texas Stars, but callups have been frequent.

“It's good in terms of proximity and having the relationship with the Stars with Modano there,” said White. “Their proximity to teams in our league is important. I picked up the phone probably about eight times last season asking who was playing well because I might need a guy. I expect to do the same this season again.”

With the CHL membership dwindling over the summer, there have been some rumours of a merger between the ECHL and CHL similar to the merger of the AHL and IHL. White feels the Stars would obviously have to discuss the relationships with Allen and Idaho in the case of such a merger, but they are very happy with how they stand today.

Next to GM and director of minor league operations on his crowded business card, Scott White also has the title of professional scout. He estimates that he sees 170 hockey games live each year, including Texas Stars games. His responsibilities include several NHL clubs and their AHL affiliates and some NCAA duty.

“I love the travel because I get some development, amateur and NCAA along with the pros. My job is to develop Dallas Stars. There's a process to it, whether it takes a year or three.”

On the topic of process, White is also responsible for a lot of day-to-day administrative work as the season starts but will be able to transition some of that off to assistant coach Doug Lidster once the season gets rolling.

ECHL GMs are often tasked with travel coordination and immigration for players, but luckily there is a support staff for that in Dallas for the AHL GM.

“I work hand in hand with Pam Wenzel in Dallas. If you ask anyone in our organization, she's probably the most important person in the Dallas office.”

“Otherwise my job is making sure that Willie and Doug have what they need so they can be successful.”

The Best Moment and Thoughts on the Future 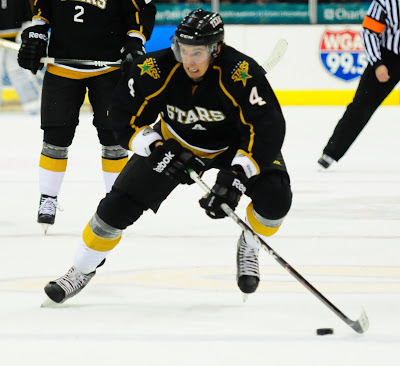 Brenden Dillon, among those who got a shot in the show last season (Credit: Ben Hall/Lake Erie Monsters)

Asked about what his best moment was as GM for Texas, White had a two-pronged response. Obviously the trip to the finals in the first year was a big success, but he pointed to another more common experience as still being awe-inspring.

“The coolest call you make, the best call is telling a kid he's going to the show for the first time. Ultimately, these guys all want to play in the NHL. It's a great call to make. All the scouts and everybody deserve credit for it, but the rush of the call is great. You've got to tell the kids to get their stuff together and get to Dallas and then call everyone. You think about the filter down effect of everyone that player is going to call; it's awesome.”

While there may not be any Texas Stars going to the show for the foreseeable future this season, White has high hopes for the AHL club overall.

“The level is going to be very high with players being better and the training camp groups being together from day 1. We’ve got a good mix of youth and veteran players. I think the players who were here last year are looking for some redemption, and the addition of the younger players is huge. I expect high quality.”
allen americans idaho steelheads interviews the business side