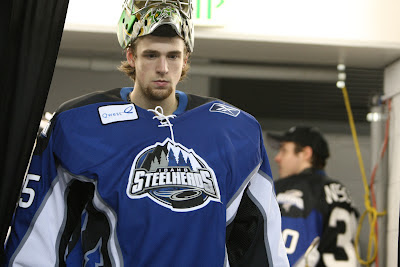 Tyler Beskorowany in Idaho during the 2010-11 season (Credit: Idaho Steelheads)

Tyler Beskorowany was the headliner among seven moves today that trimmed the Texas Stars roster to 27. Defenseman Matt Case and forwards Jacob Cepis, Austin Fyten and Andrew Carroll were released from their tryouts, but all are expected to join Idaho for the season. Forward Tristan King, defenseman John Ryder, and goalie Tyler Beskorowany were all assigned to Idaho.

Tristan King showed a good bit of growth over the last time he was in Texas's camp. He has a chance to really shine at the ECHL level and be a quality callup. However, there are still probably 4 or 5 too many bodies in Texas that will probably be in front of him for those jobs. He will have to excel beyond anything he's ever done to prove he should be welcomed back to the CPC during the season.

Tyler Beskorowany had a really rough year last season. The team defense in front of him was part of it, but at the same time, his level of play seemingly dropped off from prior years and expectations of a second round pick. He is in the last year of his entry level deal and will have a tough time battling up the depth chart. Texas will be extremely reticent to send Campbell or Nilstorp down, so injury up the line is the only way that Beskorowany returns. His chances are further hurt by the lockout, as there are only two possible goalies to get injured in front of him instead of four.
idaho steelheads roster moves training camp