Austin Smith Learning the Ropes, Scoring in Bunches in ECHL 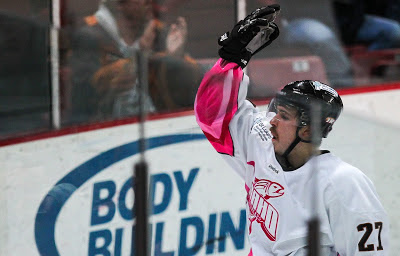 Austin Smith asks the crowd for some noise after scoring a goal in Idaho's Pink in the Rink game (Credit: Steve Conner)

In case you hadn't noticed, Austin Smith is on a tear recently for the ECHL's Idaho Steelheads. He is on a nine game scoring streak, during which he has compiled eleven goals and four assists. Three of those goals have been game-winners.

Austin Smith was put in a tough situation to start the year. With the NHL lockout creating a forward depth logjam, Smith was looking at the prospect of spending his rookie season mostly in the press box, cycling into the lineup only occasionally.

So instead of being a healthy scratch for Texas, Smith asked to be sent to the ECHL's Idaho Steelheads.

"Sometimes it's not easy for players to go down to the Coast and play, but Austin's done that."

All reports from Idaho indicate that his attitude and work ethic have been top-notch as well. That's not always the case when players, especially drafted players, get assigned to the ECHL.

"I'm pleased with how it's been going with Coach [Brad] Ralph helping the adjustment of [Austin] and putting him in situations that can help him. Brad's job is to have Austin work on the details of his game, board play and things like that. We know he can score, so it's a matter of tweaking the rest of his game and getting him experiences in situations that will help him at the next level."

Smith spoke last year about the adjustment of college to the professional game. In college, he had more free reign to do whatever he wanted because he was 'the guy'. In the pro ranks, there is a more disciplined game plan, especially on defense. In Smith's fifteen games with Idaho, he is plus-14, second-best on the team behind Adrian Foster.

"It's been a good opportunity for Austin," said White. "He's just waiting for his turn for me to call him, and I think that'll come pretty soon."
analysis idaho steelheads