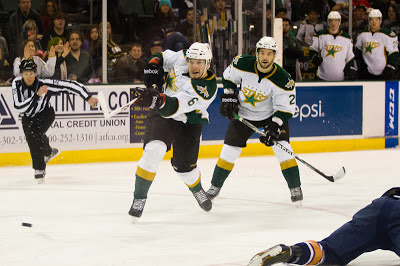 Jamie Oleksiak scores his second of the year in the second period. (Credit: Josh Rasmussen/Texas Stars)

The Stars fell to the Barons 5-4 tonight in Cedar Park in a game dominated by power play scoring for both clubs. Taylor Hall had two power play goals among his three total goals to earn the first star. The Barons had three power play goals overall to the Stars two, scored by Sceviour and Roussel. Texas simply allowed too many power play opportunities to the top-ranked power play in the league, eight in total.

Jack Campbell stopped 21 of 26 shots against in the game. Colton Sceviour collected two goals and Jamie Oleksiak had a goal and an assist.

Oklahoma City struck first in tonight's game. The power play goal came courtesy of Jordan Eberle, who wired a wrist shot over Jack Campbell's right shoulder for the 1-0 lead. The tally was assisted by Justin Schultz and Mark Arcobello. The Barons capitalized again on the power play in the last minute of the period with Taylor Hall one-timing the puck to the net with 18.9 seconds remaining. Arcobello and Schultz again assisted on the power play tally. Texas led on shots 11-6 despite the 2-0 deficit on the scoreboard.

The middle frame would see Texas surge back with two goals of their own. The Stars went on a 3-on-1 rush in the fifth minute of the period and Jamie Oleksiak foudn twine with his second goal of the year. The slick wrister from the right-wing circle was unassisted and put the crowd back into it.

The Texas power play activated in the second period to tie the game in the 14th minute. Colton Sceviour sent the puck to the net from the left wing half-wall and then charged the net. Sceviour collected a rebound and shot the puck in between Reilly Smith's legs for the 2-2 tie.

OKC would quickly regain their lead, however. On the next play, Teemu Hartikainen picked up his ninth of the year on a fluky play. Jack Campbell appeared to have collected the puck but it actually tipped off his glove and into the net for the 3-2 Barons lead to end the second period.

The power play once again cashed in for Texas as the third period opened. With Nathan Deck in the box for interference, Antoine Roussel continued his record setting season with his sixth of the year. A Brenden Dillon blast from the point rebounded perfectly to Roussel at the left of the net where he tapped it in for the three-all tie.

The wheels came off in the remainder of the third period as Taylor Hall showed why he is an NHL first round pick. Hall had a carbon copy of his first power play goal from the right wing circle to make it 4-3. Then shortly thereafter, Hall scored on a breakaway to secure a hat trick.

Colton Scveiour would add another tally at even-strength low ont he left-wing side off a nice pass from Jamie Oleksiak. Ultimately, it would not be enough.

Texas will be in action again at home on Saturday against the division-leading Checkers.

The Stars called up Austin Smith prior to the game to replace Cody Eakin in the lineup. Eakin took a stick to the mouth in the game against Houston last night.

The Stars lost Tomas Vincour in the first period, and he did not return. Depending on Cody Eakin's health, Texas may need to call up another forward. Candidates include Mathieu Tousignant and Tristan King from the Steelheads.