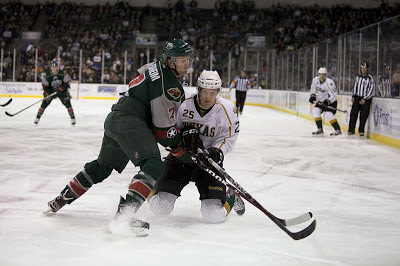 Something had to give tonight between the Houston Aeros and Texas Stars. Houston came into the Cedar Park Center with a five game winning streak and Texas had won five of its last six. In the end, the Aeros walked away with a razor thin 2-1 overtime victory over the Stars.

The Stars barraged the Houston net early, outshooting the Aeros 11-0 before Houston got its first shot. Unfortunately, that shot foudn twine behind Cristopher Nilstorp. Kris Freidheim's point shot deflected off a Texas defender and set the score at 1-0.

"A goal for them doesn't change our mentality or structure. We try to go shift after shift," said Francis Wathier. "It shows our confidence and how much we believe in our team."

Texas kept their even-keel throughout the first, outshooting the Aeros 16-5 overall but still heading to the locker room down 1-0.

Road legs hit in the second period for Texas, but goalie Cristopher Nilstorp kept them in it.

"In the second period, you could see we were tired," said Coach Willie Desjardins. "Nilstorp's played well. He's really solid all the time."

Texas shifted their offensive philosphy as they moved to the third period, opting to crash the net more and look for the pass less. It paid off.

Creating traffic in front, Francis Wathier blocked out vision for Matt Hackett while Brenden Dillon blasted the puck from the point, scoring his second of the year and tying the game at one.

"Morin made a nice play to the D," said Wathier. "It was a great shot by Dillon. I'm in front of the net and if the goalie can see through me, he's got eyes everywhere."

The Stars would play through a mostly quiet remainder of the third period to earn a point by tying after sixty minutes.

It was Houston getting the bounce in OT to win it. Jason Zucker snuck behind the Texas defense to go one-on-one with Nilstorp.

"He came in at high speed and roofed it," said Nilstorp. "It was a good goal."

Overall, Texas outshot Houston 36-20. Matt Hackett looked fully dialed-in all night though, riding a five game winning streak into a sixth with the victory over the Stars.

The Stars showed good character in the game, as they have recently, by coming back in the third period despite having given up the first goal. They are now 7-8-2-1 in games where they allow the first goal.

Texas will stay in town to face Peoria on Saturday.