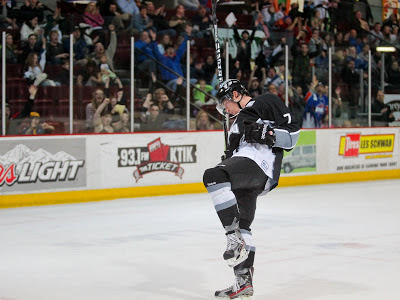 I’m back at it again here in the New Year and with the holiday season finally behind us and out of the way, this report will hopefully start to fall into a regular timeslot of every Tuesday here on 100degreehockey.com.

Hope I didn’t miss anything over the past two weeks. Other than the complete devastation that appears to be the Idaho Steelheads roster, now that all the prospects and contract players were called away to the AHL to fill/stay in those roster spots for the remaining part of the year, probably not.

Congratulations to Steelheads PxP/Media Relations/PR Director Will Hoenike on the birth of his daughter (Natalie Dawn) two weeks ago.

Now on to some quick game recaps:

Jan 4 and Jan 5 vs. Bakersfield Condors

The Steelheads found the offense they were missing over the previous week as they outplayed, outclassed and embarrassed the Bakersfield Condors by a total score of 15-5 over the two game series. This would also turn out to be the last series played before the NHL lockout would end and rosters would be destroyed.

After what must have felt like the 3 longest days for Head Coach Brad Ralph, the Steelheads were able to sign a couple of new players and find just enough offense as Tristan King with a goal early in the third period would give the Steelheads a 2-1 win.

In the re-match of the previous weekends games, the Condors were the team that game out guns blazing and with both a great power play and at time a not so great Steelheads penalty kill, the Condors were able to sweep the Idaho Steelheads 11-2 over this two game set (including a 5-0 shutout Friday night).

Earlier this week, I posted on twitter (@Mulhern4) that there is a chance that NHLer Scott Gomez could end up back in Alaska for the remaining part of the season. Here’s how: Gomez, along with Wade Redden, appears to on track for what is now being called an Accelerated Buy-out. Basically, their teams will be using one of their Amnesty buy-outs this season. This makes Gomez a free agent. The Alaska Aces suspended Gomez on January 6th when they were informed he would be leaving to return to the NHL.

Alaska still holds his ECHL rights should no team sign Gomez, who is 34, to a contract this year. There is always the change Gomez could choose to just sit out the rest of the season, but with the Aces leading the Western Conference and Scott Gomez being a competitor, I think that if no NHL team decides to give him a shot there a real good chance he returns to the Aces.

Steelheads have 2 games against those Alaska Aces this Friday 1/18 and Saturday 1/19. We’ll back next Tuesday with a recap of the weekend and a deeper look into the new Steelheads roster.
idaho steelheads report