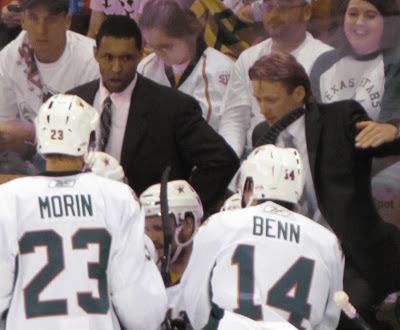 Coaches Paul Jerrard and Glen Gulutzan will surely be ready to start their second season in Dallas with, among others, Jamie Benn (Credit: Brian Hackert)

News broke early this morning that the NHL and NHLPA had reached an agreement on a new Collective Bargaining Agreement, ending the NHL Lockout. The season is tentatively believed to start on either January 15th or 19th, depending on how quickly some housekeeping can get taken care of, such as ratification of the deal.

Of course, this means the AHL is about to undergo a tumultuous week. Players who should have been in the NHL this season will be called up, never to return, and will leave some teams in quite a lurch regarding their scoring and production. The Barons, for example, have scored 112 goals on the season. Sixty-five of those have been scored by Justin Schultz, Taylor Hall, Jordan Eberle and Ryan Nugent-Hopkins. Reports are that those players left Chicago's Allstate Arena today in the midst of preparing for a game.

For Texas, the story is not quite as dire. The players expected to leave Texas and head to Dallas this week include Cody Eakin, Tomas Vincour, Jordie Benn and Brenden Dillon. It is possible that Reilly Smith or Matt Fraser could go and another defenseman, possibly Oleksiak. They may not stick there but might get a look.

The Stars and other NHL teams will likely not be holding training camps as large as they would have in September. The players called to camp will only be the ones that are expected to make the roster so that the training camp does not disrupt the AHL roster too much. Mark Stepneski reports that Dallas Stars head coach Glen Gulutzan expects 25 players, an overage of just two beyond the NHL roster limit of 23.

Texas has stated however that all of their players will remain the lineup tonight. Likely, it will be the last time for some of the aforementioned players.

Let's take a look at last night's lines, minus the players expected to leave.

First of all, on defense, Texas does have Tyler Sloan to fill in Dillon's spot. However, Sloan is injured so it would, for now, be Gord Baldwin coming in.

On offense, Texas would need to shift someone up the lineup to center their top line. Colton Sceviour played well there in the one game that Eakin missed, scoring two goals. Gazdic can slide in on the fourth line.

Next, the Stars will have to consider callups to fillthe remaining spot and the healthy scratches. Austin Smith should be packing his bags today because he is surely being called up. I think, given his production in the ECHL and ECAC, he should be on the second line with Morin and Fraser. That would be quite the scoring combo with Morin dishing to Fraser and Smith on his wings.

The healthy scratch or scratches are then left to the coach and GM's decision. Tristan King has been doing well in the ECHL, but Texas has shown resistance to calling him up in the past. Mathieu Tousignant has 4-15-19 and a plus-10. He is a likely callup.

On defense, Texas would likely have called up Jace Coyle last week if not for his foot injury. He could come up when healthy. However, I have mentioned here before that the Stars should be leaving Coyle in the ECHL to mature with lots of ice time.

Finally, I want to thank everyone who read this blog and followed me on Twitter during the lockout. I strive to provide high-quality coverage of the Texas Stars. I hope that those of you who came to follow Dallas Stars prospects in lieu of NHL hockey will still read to cheer for this team and these future Dallas Stars through the rest of the season and the playoffs, hopefully.
lockout