A Way-Too-Early Look at the Stars' 2013 Amateur Tryouts 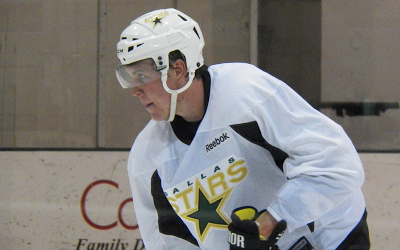 Admittedly, it's way early. But we've just past the All-Star Break and before we know it, the season will be drawing to a close. With the spring wearing on, clubs across the US and Canada will be ending their seasons. And with that, the amateur tryouts will begin.

For those who are new to the league this season, the American Hockey League allows players who have reached the end of their major junior or collegiate seasons to sign amateur tryout contracts or ATOs. Many times these players are already under contract to the NHL affiliate and other times they are just promising kids who went undrafted.

These players don't count against the club's Clear Day roster and don't have burn a year of their NHL contract by playing. It is often a great way to get a jumpstart on their professional career.

Players currently on the Stars who started on ATOs include Jack Campbell, Austin Smith and Taylor Vause.

So, here is a way-too-early preview of the players Texas could expect this season and when.

Ritchie is a prospect that Dallas Stars fans have been watching closely this season. Early in the season he compiled an eight game goal scoring and ten game point scoring streak. Despite disappointment in losing to the Russians in the bronze game at the World Juniors, Brandon Worley heaps praise on the young winger. He is 6th in the league in goals (28) and 21st in points (52). He is a gaudy plus-25 to boot.

The IceDogs are currently in sixth place and look entrenched to make the playoffs. Texas got Jack Campbell early last year when his club missed the playoffs. Niagara does not appeared poised to do that. They will play their final regular season game on March 16th. Playoffs will begin after that. The AHL season will continue until April 20th this year. ATOs can be added in the AHL playoffs as well. However, they are unlikely to play much since the teams will have more on the line.

Winkler is a lesser-known prospect for Stars' fans. Drafted in the third round in 2009, he hails from Norway, a relative rarity in the NHL. Only eighteen players have been drafted from Norway. In 26 games this season, he has 11 goals and 12 assists.

The center Winkler plays at Colorado College and will be ending his four years of NCAA eligibility after this season. Colorado College was also home to former Stars Richard Bachman, Scott McCulloch and Stephen Schultz. Colorado College has a losing records this season and will likely be done with hockey first among these three teams. The WCHA has a year-end tournament to which all teams are invited. Seeding would place CC at a disadvantage and they would likely be out in the first round. Based on rankings, CC is unlikely to be invited to the NCAA Tournament as well. The only way they could be would be if the team won the WCHA tourney and became the league's automatic qualifier.

The WCHA wraps up its tournament on March 23.

Curtis McKenzie was a sixth round pick in 2009 out of the Penticton Vees, where he played with Austin Smith in 2007-08. He had an impressive final season in the BCHL (30-34-64 in 53 games), which likely led to his choice on the draft board. He, like Austin, went the NCAA route. McKenzie joined up with the Miami Redhawks, the same club as Reilly Smith.

McKenzie is third on the club in scoring this season with 7-9-16 in 23 games. The Redhawks have only lost four games this season and currently rank fourth on the NCAA Division I Men's Hockey Rankings. They will likely go to the NCAA Tournament and compete there for a national championship. That game is on April 13th in Pittsburgh, which is the latest McKenzie could be involved for the Redhawks.
ato